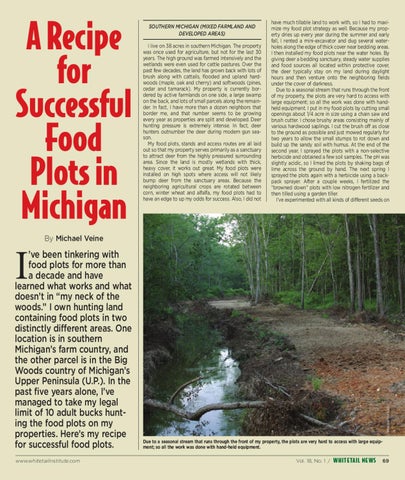 A Recipe for Successful Food Plots in Michigan

SOUTHERN MICHIGAN (MIXED FARMLAND AND DEVELOPED AREAS) I live on 38 acres in southern Michigan. The property was once used for agriculture, but not for the last 30 years. The high ground was farmed intensively and the wetlands were even used for cattle pastures. Over the past few decades, the land has grown back with lots of brush along with cattails, flooded and upland hardwoods (maple, oak and cherry) and softwoods (pines, cedar and tamarack). My property is currently bordered by active farmlands on one side, a large swamp on the back, and lots of small parcels along the remainder. In fact, I have more than a dozen neighbors that border me, and that number seems to be growing every year as properties are split and developed. Deer hunting pressure is extremely intense. In fact, deer hunters outnumber the deer during modern gun season. My food plots, stands and access routes are all laid out so that my property serves primarily as a sanctuary to attract deer from the highly pressured surrounding area. Since the land is mostly wetlands with thick, heavy cover, it works out great. My food plots were installed on high spots where access will not likely bump deer from the sanctuary areas. Because the neighboring agricultural crops are rotated between corn, winter wheat and alfalfa, my food plots had to have an edge to up my odds for success. Also, I did not

have much tillable land to work with, so I had to maximize my food plot strategy as well. Because my property dries up every year during the summer and early fall, I rented a mini-excavator and dug several waterholes along the edge of thick cover near bedding areas. I then installed my food plots near the water holes. By giving deer a bedding sanctuary, steady water supplies and food sources all located within protective cover, the deer typically stay on my land during daylight hours and then venture onto the neighboring fields under the cover of darkness. Due to a seasonal stream that runs through the front of my property, the plots are very hard to access with large equipment; so all the work was done with handheld equipment. I put in my food plots by cutting small openings about 1/4 acre in size using a chain saw and brush cutter. I chose brushy areas consisting mainly of various hardwood saplings. I cut the brush off as close to the ground as possible and just mowed regularly for two years to allow the small stumps to rot down and build up the sandy soil with humus. At the end of the second year, I sprayed the plots with a non-selective herbicide and obtained a few soil samples. The pH was slightly acidic, so I limed the plots by shaking bags of lime across the ground by hand. The next spring I sprayed the plots again with a herbicide using a backpack sprayer. After a couple weeks, I fertilized the “browned down” plots with low nitrogen fertilizer and then tilled using a garden tiller. I’ve experimented with all kinds of different seeds on

’ve been tinkering with food plots for more than a decade and have learned what works and what doesn’t in “my neck of the woods.” I own hunting land containing food plots in two distinctly different areas. One location is in southern Michigan’s farm country, and the other parcel is in the Big Woods country of Michigan’s Upper Peninsula (U.P.). In the past five years alone, I’ve managed to take my legal limit of 10 adult bucks hunting the food plots on my properties. Here’s my recipe for successful food plots.

Due to a seasonal stream that runs through the front of my property, the plots are very hard to access with large equipment; so all the work was done with hand-held equipment. Vol. 18, No. 1 /