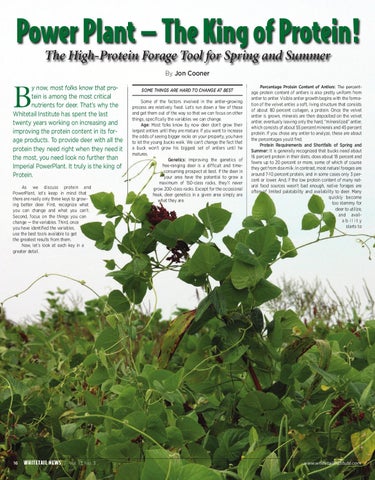 Power Plant — The King of Protein! The High-Protein Forage Tool for Spring and Summer By Jon Cooner

y now, most folks know that protein is among the most critical nutrients for deer. That’s why the Whitetail Institute has spent the last twenty years working on increasing and improving the protein content in its forage products. To provide deer with all the protein they need right when they need it the most, you need look no further than Imperial PowerPlant. It truly is the king of Protein.

Some of the factors involved in the antler-growing process are relatively fixed. Let’s run down a few of these and get them out of the way so that we can focus on other things, specifically the variables we can change. Age: Most folks know by now deer don’t grow their largest antlers until they are mature. If you want to increase the odds of seeing bigger racks on your property, you have to let the young bucks walk. We can’t change the fact that a buck won’t grow his biggest set of antlers until he matures. Genetics: Improving the genetics of free-ranging deer is a difficult and timeconsuming prospect at best. If the deer in your area have the potential to grow a maximum of 150-class racks, they’ll never grow 200-class racks. Except for the occasional freak, deer genetics in a given area simply are what they are.

Percentage Protein Content of Antlers: The percentage protein content of antlers is also pretty uniform from antler to antler. Visible antler growth begins with the formation of the velvet antler, a soft, living structure that consists of about 80 percent collagen, a protein. Once the velvet antler is grown, minerals are then deposited on the velvet antler, eventually leaving only the hard, “mineralized” antler, which consists of about 55 percent minerals and 45 percent protein. If you chose any antler to analyze, these are about the percentages you’d find. Protein Requirements and Shortfalls of Spring and Summer: It is generally recognized that bucks need about 16 percent protein in their diets, does about 18 percent and fawns up to 20 percent or more, some of which of course they get from doe milk. In contrast, most natural forages are around 7-10 percent protein, and in some cases only 3 percent or lower. And, if the low protein content of many natural food sources wasn’t bad enough, native forages are often of limited palatability and availability to deer. Many quickly become too stemmy for deer to utilize, and availability starts to

As we discuss protein and PowerPlant, let’s keep in mind that there are really only three keys to growing better deer. First, recognize what you can change and what you can’t. Second, focus on the things you can change — the variables. Third, once you have identified the variables, use the best tools available to get the greatest results from them. Now, let’s look at each key in a greater detail.

SOME THINGS ARE HARD TO CHANGE AT BEST