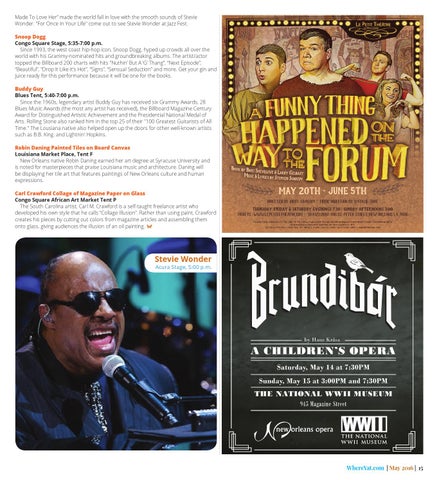 Made To Love Her” made the world fall in love with the smooth sounds of Stevie Wonder. “For Once In Your Life&quot; come out to see Stevie Wonder at Jazz Fest. Snoop Dogg Congo Square Stage, 5:35-7:00 p.m. Since 1993, the west coast hip-hop icon, Snoop Dogg, hyped up crowds all over the world with his Grammy-nominated hits and groundbreaking albums. The artist/actor topped the Billboard 200 charts with hits &quot;Nuthin’ But A ‘G’ Thang”, “Next Episode”, “Beautiful”, “Drop It Like It’s Hot”, “Signs”, “Sensual Seduction” and more. Get your gin and juice ready for this performance because it will be one for the books. Buddy Guy Blues Tent, 5:40-7:00 p.m. Since the 1960s, legendary artist Buddy Guy has received six Grammy Awards, 28 Blues Music Awards (the most any artist has received), the Billboard Magazine Century Award for Distinguished Artistic Achievement and the Presidential National Medal of Arts. Rolling Stone also ranked him in the top 25 of their &quot;100 Greatest Guitarists of All Time.&quot; The Lousiana native also helped open up the doors for other well-known artists such as B.B. King. and Lightnin’ Hopkins. Robin Daning Painted Tiles on Board Canvas Louisiana Market Place, Tent F New Orleans native Robin Daning earned her art degree at Syracuse University and is noted for masterpieces that praise Louisiana music and architecture. Daning will be displaying her tile art that features paintings of New Orleans culture and human expressions. Carl Crawford Collage of Magazine Paper on Glass Congo Square African Art Market Tent P The South Carolina artist, Carl M. Crawford is a self-taught freelance artist who developed his own style that he calls “Collage Illusion”. Rather than using paint, Crawford creates his pieces by cutting out colors from magazine articles and assembling them onto glass, giving audiences the illusion of an oil painting. 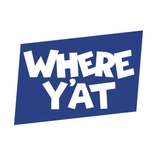