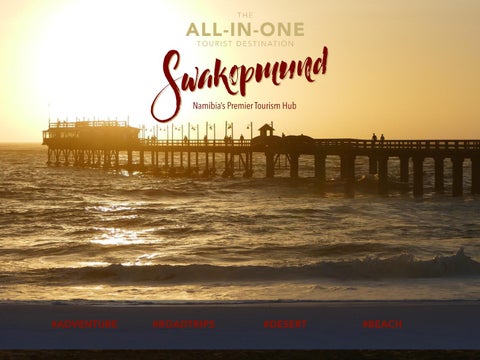 AFRICA NAMIBIA SWAKOPMUND As one of Namibiaâ&amp;#x20AC;&amp;#x2122;s most sought-after holiday destinations, Swakopmund, has in recent years become an important tourist hub in the country.Â Situated centrally along the Atlantic coastline of Namibia, Swakopmund is one of the main towns through which many tourists travelling in Namibia will have to pass.

PLAN YOUR #TRIP PLAN YOUR TRIP wheretostay.na/destinationswakopmund TO STAY LONGER

VISIT THE HISTORICAL BUILDINGS Swakopmund is widely known and loved for its Old World charm of beautiful, well kept buildings from the founding days at the turn of the century. Eleven buildings in Swakopmund have officially been declared national monuments on account of their architectural style. There are 33 other buildings which are also of interest.

SCULTETUS HEIM Moses Garoeb Street. In 1912 Engineer Kramer designed and built this house for himself. It was subsequently extended by Woermann Brock and used temporarily by Major Scultetus as a school hostel. It was declared a National Monument in 1977. THE PRISON Corner of Moses Garoeb Street and Hidipo Hamutenya Avenue. The prison was completed in 1909. Apart from extensions to the rear, the building is still in its original form. This building was declared a National Monument in 1973. OTAVI BAHNHOF Sam Nujoma Avenue. This was the original station built in 1906. It was used until 1914 for the export of copper ore. GERMAN SCHOOL Daniel Tjongarero Avenue. Built in 1913, the school houses the German-medium secondary school. O.M.E.G.HAUS Sam Nujoma Avenue. An old goods shed, declared a National Monument in 1972. EVANGELICAL LUTHERAN CHURCH &amp; PARSONAGE Daniel Tjongarero Avenue. Both buildings were designed in Neu-Barock style and were completed in 1911. They were declared a National Monument in 1978. MUNICIPALITY Daniel Tjongarero Avenue. This building was erected in 1907 to serve as a Post Office, telephone exchange and living quarters for personnel. It was also used by the Magistrate and Administration until 1961 when it was given to the Municipality. ALTES AMTSGERICHT Corner Tobias Hainyeko Street and Theo-Ben Gurirab Avenue. The “Altes Amtsgericht” or Magistrate’s Court, was erected in 1908. It was originally planned as a school, but when money ran out and the Swakopmunders were not prepared to finance it any further the state completed construction and used it as Magistrate’s offices. MARINE DENKMAL Western end of Daniel Tjongarero Avenue. This monument, sculpted by a Mr. Wolff, was erected in 1908 to commemorate members of the German naval expedition killed in action. LIGHTHOUSE Originally a small lighthouse was built on the western end of the mole, but it was swept away by a huge wave soon after construction. The present 11 metre high lighthouse was constructed in 1903 further away and higher above sea level.

Historical Buildings LUDWIG SCHRODER HOUSE &amp; HAUS ALTONA Corner of Daniel Tjongarero Avenue and Tobias Hainyeko Street. These are two well-preserved business / residential buildings from former times. Haus Altona was the headquarters of the Woermann Line Shipping company. KAISERLICHES BEZIRKSGERICHT Northern side of the Am Zoll Street. This building was erected in phases during 1901 and 1905 as a seat of justice from which certain local and district affairs could also be conducted. Since 1918 it was used as the summer residence of government officials and since the country’s independence as the State President’s summer residence. HAUS HOHENZOLLERN Tobias Hainyeko Street erected in the year 1909 as a hotel. Much gambling took place in it, to such an extent that the hotel license was revoked by the Magistrate. It has now for many years been used for residential purposes. KABELMESSE Ludwig Koch Street. Built during 1901 for the Eastern and South African Telegraph Company as headquarters for its employees who installed the undersea cable from Europe to Cape Town. DIE KASERNE Corner Bismarck and Anton Lubowski Avenue. This building, in typical German Colonial style, was erected in 1905 to provide living quarters for the engineers’ regiment sent to Swakopmund to fight the Herero uprising and construct a landing pier and railway line to the interior. DR. SCHWIETERING HOUSE &amp; Old Residence Corner Daniel Tjongarero Avenue and Otavi Street. These two residences were built in 1910. The one on the corner was used by Dr and Mrs. Schwietering as consulting rooms for several decades. HAUS CORDES On the South side of Daniel Tjongarero Avenue. Named after the first Town Clerk of Swakopmund. This is one of the last remaining turn-of-the-century wooden residences. Today it is used as shops and offices. PRINZESSIN RUPPRECHT HEIM Anton Lubowski Avenue. It was built in 1902 to serve as a hospital and extended to supply all medical services to the troops. FREUDHAUS Tobias Hainyeko Street. It was built in 1899, today it houses Photo Studio Behrens.

Whatever the occasion, With the freedom to go Where-ever you want , surrounded by stunning Scenery ….The party is waiting for you !

Join the fun at the Swakopmunder Karneval !

For the latest updates , visit the KĂźska Facebook Page.

A shopping basket full of surprises.

RESTAURANTS &amp; COFFEE SHOPS From the finest Food and Wine for the connoisseur , German Delicatessen, Boere-kos and Traditional food to the Hamburgers, Pizza , Pasta and Hotdog stands.

MORE TO #EXPLORE MOLE The mole is situated at the spot where Swakopmund was founded by Hauptman Curt von Francois, the Commander of the German armed forces, the Schutztruppe, on August 4, 1892. The Germans attempted to establish landing facilities for ships but their efforts to build a harbour failed because the currents continuously deposited sand. WOERMANN TOWER The top of the Woermann Tower offers an excellent viewpoint over Swakopmund, the ocean and the surrounding desert. Interested visitors may obtain the keys for the staircase to the tower from the local gallery of the Swakopmund Arts Association, also situated in the historical Woermann Haus, against a small fee. Children need to be accompanied by adults. MUSEUM The Swakopmund museum started as the scientific collection of Dr. Alfons Weber in 1951. It was transferred to the present site in 1960. Special exhibits include panoramas of the desert and sea life, a collection of semi-precious stones, an extensive historical collection and a modern technical exhibit of the largest open uranium mine in the world – Rössing. The building was originally the customs shed of the harbour. When Swakopmund was bombarded by an auxiliary cruiser “Kinfauns Castle1,” on September 24, 1914 during World War 1, the building was destroyed by fire. The ruins were renovated some forty years later to house the museum. WAR MEMORIAL On the way back to town through the municipal garden, there is a memorial to commemorate the soldiers who died in the two world wars. Martin Luther Steam Locomotive On your way out of town you will pass the old steam locomotive, “Martin Luther,&quot; given the name because of Mr. Luther’s historic statement in 1521, “Here I stand: I cannot do otherwise”.

#FREEDOM Of day camping on the beach, 2x4 or 4x4 driving

#EXPLORE JUST OUTSIDE SWAKOPMUND, YOU WILL FIND A DESERT WORLD OF WONDERS 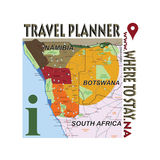