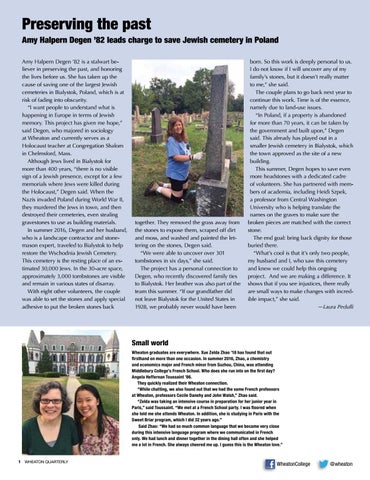 Preserving the past Amy Halpern Degen ’82 leads charge to save Jewish cemetery in Poland Amy Halpern Degen ’82 is a stalwart believer in preserving the past, and honoring the lives before us. She has taken up the cause of saving one of the largest Jewish cemeteries in Bialystok, Poland, which is at risk of fading into obscurity. “I want people to understand what is happening in Europe in terms of Jewish memory. This project has given me hope,” said Degen, who majored in sociology at Wheaton and currently serves as a Holocaust teacher at Congregation Shalom in Chelmsford, Mass. Although Jews lived in Bialystok for more than 400 years, “there is no visible sign of a Jewish presence, except for a few memorials where Jews were killed during the Holocaust,” Degen said. When the Nazis invaded Poland during World War II, they murdered the Jews in town, and then destroyed their cemeteries, even stealing gravestones to use as building materials. In summer 2016, Degen and her husband, who is a landscape contractor and stonemason expert, traveled to Bialystok to help restore the Wschodnia Jewish Cemetery. This cemetery is the resting place of an estimated 30,000 Jews. In the 30-acre space, approximately 3,000 tombstones are visible and remain in various states of disarray. With eight other volunteers, the couple was able to set the stones and apply special adhesive to put the broken stones back

together. They removed the grass away from the stones to expose them, scraped off dirt and moss, and washed and painted the lettering on the stones, Degen said. “We were able to uncover over 301 tombstones in six days,” she said. The project has a personal connection to Degen, who recently discovered family ties to Bialystok. Her brother was also part of the team this summer. “If our grandfather did not leave Bialystok for the United States in 1928, we probably never would have been

born. So this work is deeply personal to us. I do not know if I will uncover any of my family’s stones, but it doesn’t really matter to me,” she said. The couple plans to go back next year to continue this work. Time is of the essence, namely due to land-use issues. “In Poland, if a property is abandoned for more than 70 years, it can be taken by the government and built upon,” Degen said. This already has played out in a smaller Jewish cemetery in Bialystok, which the town approved as the site of a new building. This summer, Degen hopes to save even more headstones with a dedicated cadre of volunteers. She has partnered with members of academia, including Heidi Szpek, a professor from Central Washington University who is helping translate the names on the graves to make sure the broken pieces are matched with the correct stone. The end goal: bring back dignity for those buried there. “What’s cool is that it’s only two people, my husband and I, who saw this cemetery and knew we could help this ongoing project. And we are making a difference. It shows that if you see injustices, there really are small ways to make changes with incredible impact,” she said. —Laura Pedulli

Small world Wheaton graduates are everywhere. Xue Zelda Zhao ’18 has found that out firsthand on more than one occasion. In summer 2016, Zhao, a chemistry and economics major and French minor from Suzhou, China, was attending Middlebury College’s French School. Who does she run into on the first day? Angela Heffernan Toussaint ’86. They quickly realized their Wheaton connection. “While chatting, we also found out that we had the same French professors at Wheaton, professors Cecile Danehy and John Walsh,” Zhao said. “Zelda was taking an intensive course in preparation for her junior year in Paris,” said Toussaint. “We met at a French School party. I was floored when she told me she attends Wheaton. In addition, she is studying in Paris with the Sweet Briar program, which I did 32 years ago.” Said Zhao: “We had so much common language that we became very close during this intensive language program where we communicated in French only. We had lunch and dinner together in the dining hall often and she helped me a lot in French. She always cheered me up. I guess this is the Wheaton love.”

A magazine for the Wheaton community. 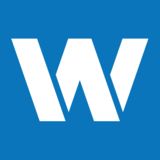