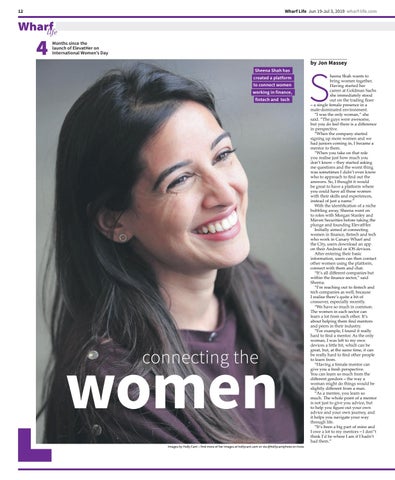 Months since the launch of ElevatHer on International Women’s Day

Sheena Shah has created a platform to connect women working in finance, fintech and tech

Images by Holly Cant – find more of her images at hollycant.com or via @hollycantphoto on Insta

heena Shah wants to bring women together. Having started her career at Goldman Sachs she immediately stood out on the trading ﬂoor – a single female presence in a male-dominated environment. “I was the only woman,” she said. “The guys were awesome, but you do feel there is a diﬀerence in perspective. “When the company started signing up more women and we had juniors coming in, I became a mentor to them. “When you take on that role you realise just how much you don’t know – they started asking me questions and the worst thing was sometimes I didn’t even know who to approach to ﬁnd out the answers. So, I thought it would be great to have a platform where you could have all these women with their skills and experiences, instead of just a name.” ith the identiﬁcation of a niche bubbling away, Sheena went on to roles with Morgan Stanley and Maven Securities before taking the plunge and founding ElevatHer. Initially aimed at connecting women in ﬁnance, ﬁntech and tech who work in Canary Wharf and the City, users download an app on their Android or iOS devices. After entering their basic information, users can then contact other women using the platform, connect with them and chat. “It’s all diﬀerent companies but within the ﬁnance sector, said Sheena. “I’m reaching out to ﬁntech and tech companies as well, because I realise there’s quite a bit of crossover, especially recently. “We have so much in common. The women in each sector can learn a lot from each other. It’s about helping them ﬁnd mentors and peers in their industry. “For example, I found it really hard to ﬁnd a mentor. As the only woman, I was left to my own devices a little bit, which can be great, but, at the same time, it can be really hard to ﬁnd other people to learn from. “Having a female mentor can give you a fresh perspective. You can learn so much from the diﬀerent genders the way a woman might do things would be slightly diﬀerent from a man. “As a mentee, you learn so much. The whole point of a mentor is not just to give you advice, but to help you ﬁgure out your own advice and your own journey, and it helps you navigate your way through life. “It’s been a big part of mine and I owe a lot to my mentors – I don’’t think I’d be where I am if I hadn’t had them.”