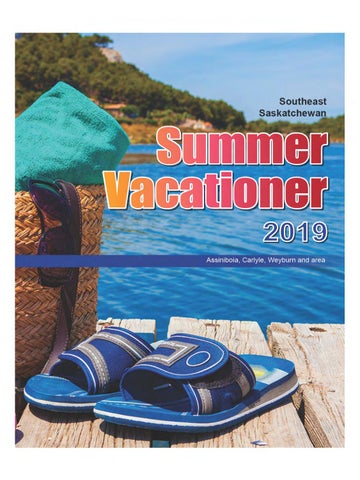 centre, swimming, a farmer’s market, museum tours, a cabaret and children’s activities. For those who enjoy history, a shuttle bus tour with a local historian will begin at the museum and take you to the former site of the Bishopric salt plant, the former site of the RCAF No. 2 Bombing & Gunnery School and the Ardill Hotel. Visit www. mossbank.ca or follow Mossbank’s Old Wives Lake Festival Facebook page for details. Old Wives Lake, a national bird sanctuary and a birdwatcher’s paradise, is located only five minutes north of the community. It is the second largest saline lake in Canada and the fourth largest in North America. It is the perfect place for nature and bird enthusiasts to spend the day. Old Wives Lake Nature Area is complete with walking trails, interpretive signage, a viewing deck and a gazebo. Wednesday, August 21st is the Museums main fundraiser, Apple Pie Day. For over 25 years, visitors and locals have joined together over pie and coffee for good conversation and friendship. Finish the day off by bringing the family by for the third Annual Glow ‘N Swim at the community pool. Mossbank & District Museum summer hours are 9 a.m. to 5 p.m. Their summer students will be on hand to give tours and answer your questions. During the remainder of the year, the museum is open upon request. Please call (306) 354-2811 or (306) 354-7469 to arrange a tour. The Mossbank Campground is open from May 15 to September 15 each year. There are 18 sites in total to allow visitors to enjoy their stay a little longer. Equipped with a community fire pit, flush toilets, hot showers and a dump pit, the camp is located beside the pool and playground, just one block from Main Street. Call Sandra at (306) 354-7790 to book.

hile visiting the community of Mossbank, take in its many historic and natural attractions. As you head south of Moose Jaw on the Number 2 Highway, 40 minutes out and you’ll arrive on Mossbank’s doorstep. Mossbank is rich with history, having a Provincial Heritage Site – the Mossbank & District Museum, home of the Ambroz Blacksmith Shop. The Ambroz Blacksmith Shop is one of the last businesses of this type to operate in Western Canada. Live demonstrations are performed throughout the summer as well as during trade fairs. Also, there are blacksmith training sessions. In addition, there’s several artifacts left from the RCAF No.2 Bombing and Gunnery School. Plus, Mossbank’s early settlement history, school life and historical agriculture equipment are on display in various parts of the five-building complex. The Mossbank area was home to the RCAF No. 2 Bombing & Gunnery Station, which was situated south of the current Mossbank Golf Course and was one of the most important training sites for Commonwealth pilots in Second World War. The scale of the former base show signs visible from the air. The concrete and the runway still remain. There’s also evidence of bombing conducted over Old Wives Lake. In 2018, the golf club received a grant to renovate the last remaining building from the RCAF No. 2 Bombing & Gunnery Station. The Mossbank Golf Club hosts a golf tournament and BBQ as part of the Old Wives Lake Festival running from July 19-21. This vicinity is ready for self-guided tours with information signs around the area. For more information on this site, please contact the local museum. Hosted by Justinsane Barbie Car Club, Mossbank’s Annual Show ‘N Shine is part of this year’s Old Wives Lake Festival on July 20. To complete the weekend, come celebrate at the Annual Old Wives Lake Festival, which will include axe throwing, a portable game

Locomotive 3522 is located in Bienfait. It used to play an integral role in the coal industry in southeast Saskatchewan.

ienfait is a community that has a rich history and a bright future. The town is located about a dozen kilometres east of Estevan on Highway 18. The community was incorporated as a village on April 16, 1912, and became a town on March 1, 1957. The Estevan Riot of Sept. 29, 1931, might be the moment the town is best-known for. Striking coal miners marched from Bienfait to Estevan to draw attention to their cause. The RCMP confronted them in Estevan and attempted to break up the process. Violence broke out and police opened fire on the miners, killing three of them. The strike and the riot have been covered in a number of books and other historical materials. Modern-day Bienfait is home to 762 people, according to last year’s federal census. Many of them work in Estevan, but the community also has a number of businesses that provide employment for the town’s people and services for residents. Strong links continue to exist with coal mining. Many people are employed in the mining industry, while others have found employment in the oil patch. The town also has a modern school for kindergarten to Grade 8 students that was renovated about 15 years ago. The arena and curling rink are busy during the winter months with games that attract people of all ages. The Bienfait Coalers senior hockey team won an unprecedented five straight Big Six Hockey League titles from 2011 to 2015. A new swimming pool opened in July 2015, and has proven to be a popular attraction for residents. Each year Bienfait hosts Canada Day celebrations that attract people from throughout the area. A parade makes its way through the streets of the town. Activities take place throughout the day, and the festivities are capped with an impressive fireworks display. The Bienfait Coalfields Historical Society Museum is open in the spring and summer each year, and attracts visitors with displays of coal mining equipment from 1895 to the present. Bienfait also keeps a link to its past with Locomotive 3522, a retired steam engine that used to roll through the town and was used in coal mining. The locomotive is on display in the town’s west edge. A documentary, Locomotives of Bienfait, premiered in Estevan last November. It depicts the history of Locomotive 3522 and two others engines that used to play an important role in mining. A Go Fund Me page has been set up for the restoration of Locomotive 3522.

Fishing is a popular activity on Alameda Dam.

pancake breakfast, slo-pitch tournament, parade, children’s area, horse show and Mud Bog. On August 22 an outdoor movie, “Aladdin” will be shown. Stoughton offers a variety of recreational opportunities throughout the year including a swimming pool in the summer and golf course as well as ball diamonds, while in the winter the rink is often a hub of activity. Another fun stop in Stoughton includes the local museum found at 327 Main Street where over 2,500 artifacts are on display in themed rooms from kitchen to living room.

t the Crossroads of Friendship, where Hwys 13, 47, and 33 intersect, is the community of Stoughton. Walking down Main Street one can find a variety of interesting places to visit including the local museum, library, bakery with delicious doughnuts, grocery store, pharmacy, tattoo shop, and much more. The community offers a variety of activities, which are held each year including Canada Day activities on July 1st each year. Stoughton Daze is being held on July 5 -7 and involves a