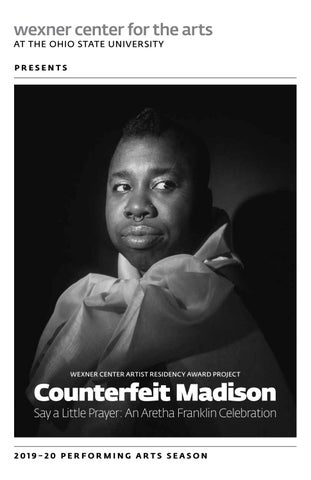 wexner center for the arts AT THE OHIO STATE UNIVERSITY PRESENTS

Thank you for joining us.

Special thanks to all Wexner Center members and sponsors. Your support makes this event possible. The Wexner Center for the Arts is your one-stop source for everything in the contemporary arts. Come back and check out our groundbreaking exhibitions, films, theater, dance, music, and programs for all ages. Visit the acclaimed Wexner Center Store and recharge with a meal or snack from Heirloom CafĂŠ. Follow us on Facebook, Instagram, and Twitter.

POLICIES Late seating and reentry after the program has begun are generally not permitted at dance and theater presentations. When late seating is permitted, latecomers will be seated during a break so as not to disturb other patrons. Taking photographs, filming, or operating recording devices during the performance is strictly prohibited. Please turn off mobile phones and other electronic devices before the performance. All programs are subject to change. Sorry, no refunds or exchanges unless an event is canceled.

The Wexner Centerâ&#x20AC;&#x2122;s presentation of this event is made possible by the Greater Columbus Arts Council, Ohio Arts Council, American Electric Power Foundation, The Columbus Foundation, Institute of Museum and Library Services, and Nationwide Foundation. Additional support is provided by Johnstone Fund for New Music.

this presentation is made possible by

Say a Little Prayer: An Aretha Franklin Celebration PERFORMED By

I have always just dabbled with Arethaâ&#x20AC;&#x201D;I love the hits that everybody knows. But her insane range has kept me away from delving deep into her music, as she is a soprano with over three octaves, and I am a tenor, with less than two. However, once I started to focus on our similarities instead of our differences, I found a place for myself in her music. I, like Aretha, am a Black woman who sings and plays like someone who grew up in church. In addition, Aretha was unabashedly herself.

Sharon Udoh: A Rare Bird By Jacqueleen Bordjadze, fourth-year student in dance and English at Ohio State “The opportunities outside of indie rock—those people get me so much faster because they’re not tied to genre, they’re tied to human experience.” Udoh is beginning to make work that relies on her strength as a live performer. In the fall, she opened for nora chipaumire’s #PUNK 100%POP. This [past] January, she performed in an onstage adaption of Joan Didion’s The White Album with Lars Jan at Sydney Festival in Australia. She’s performing in a musical with Available Light Theater. She’s also producing her tribute performances: Nina Simone at Notes in Columbus, Sade at 100%POP, Aretha Franklin at the Lincoln Theatre. “I’ve learned so much this year, learning about myself for the first time as an artist. I’m learning that in order to be understood, I must live on the stage first, and I learned that I’m rarer than I thought I was. I’m understood very well through the eyes and the environment of someone who’s already existed, and that reference point is Nina Simone, which is humbling, because I wanna believe I can live in a world where I can stand alone. But not when I’m this rare.” Being a “rare bird” doesn’t bother Udoh. Her style, personality, and capabilities are what allow her to occupy her own niche. The Aretha Franklin tribute, though—“it’s a little more a [of] contortionist act to play Aretha.” Her association with the Wexner Center may help her establish her niche. In it, she has found that “the assumption here is that I am good and I am important.” Udoh’s shift to different paths holds both grief and exciting possibility. She believes that, on the stage, her work can grow even further. This selection is part of Writing about the Performing Arts at Ohio State, an interdisciplinary student-led project supported by the Ronald and Deborah Ratner Distinguished Teaching Award. Students from departments across the university composed responses to the center’s 2019–20 performing arts season under the direction of award recipient and Department of Dance Professor Karen Eliot and Wexner Center Manager of Public University Programs Alana Ryder with support from the center’s Performing Arts Director Lane Czaplinski. For the full text and other student writing, visit wexarts.org.

Sharon Udoh (arranger and performer) is a Columbus-based, Nigerian American pianist, vocalist, composer, arranger, and bandleader. She creates and performs under the name Counterfeit Madison, often with bassist Adam Hardy and drummer Seth Daily. Their performances are genre-spanning, magnetic, dangerous, and kind. Counterfeit Madison released its second full-length album, Opposable Thumbs, to warm reviews in November 2017 with a sold-out vinyl launch at the Wexner Center for the Arts. A 2019 Wexner Center Artist Residency Award recipient, Udoh performed in Lars Jan’s theater adaptation of Joan Didion’s The White Album at the Brooklyn Academy of Music and the Center for the Art of Performance at the University of California, Los Angeles, among other venues. Udoh’s work embodies the richness and absurdity of humanity, the extremes of empathy and chaos, and the struggle and freedom of Black and Brown individuals in America and worldwide.

Moxy Martinez (producer), a self-taught DJ, producer, and composer, has produced, performed, and DJed music on stages throughout the US and internationally since 2003. Highlights of Moxy's career include DJing at les Rencontres Trans Musicales festival in Rennes, France; being hand-selected by Tom Sachs as an audio contributor for his retrospective at the Contemporary Austin, Texas; and contributing original music to the documentary Tiny Out Loud in 2015. Say A Little Prayer is Moxy's first major stage production.

Join avant-garde trumpeter and composer Jaimie Branch and band on the heels of Fly or Die II: Bird Dogs of Paradise (2019), recently featured in the top 10 albums of NPR’s 2019 Jazz Critics Poll.

Take an unpredictable musical theater journey with three vocalists who sight-read an algorithmically generated score that always takes a different path from “Yesterday” by the Beatles to “Tomorrow” from the musical Annie. 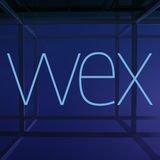 Wexner Center for the Arts