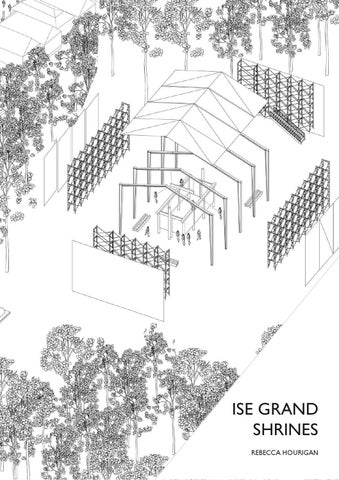 Part of the success of the Ise Grand Shinto Shrine is the successfully passing of knowledge and skills. This book looks to explore this notion of teaching using written text, a method that was originally used by the Ise Grand Shrine craftsmen. This book should be initially read in the traditional manner, the instructions to the left should then be followed. The instructions will reveal two drawings which explore the Shinto Shrine rebuilding process.

Located in the Mie Prefecture on the South East Coast of Japan, the small city of Ise is home to the Ise Grand Shinto Shrine. One of the holiest and most sacred sites in the country. This book follows my journey to the holy shrine and how this experience has altered my perception towards an alternative method of heritage preservation.

This city of Ise is around half a days travel from Toyko, reached by taking the JR bullet train to Nagoya along with a two hour train down the coast to the bottom of the Japans Mie Prefecture. Upon arriving the city was falling dark leaving little time to explore, following picture directions I made my way to the guest-house, a traditional 100 year old Japanese house complete with tatami mat flooring and sliding paper doors. Finishing the day eating camembert topped with sushi at a French- Japanese restaurant, I planned my itinerary for exploring the shrines the following day.

The shrines are not only significant within the city of Ise owning around one third of the city, but also across Japan. Seen as a place of pilgrimage the shrines have around 7 million worshippers visiting every year.

Ise Jingui consists of two main complexes Geku the Outer Shrine and Naiku the Inner Shrine, located around 6 km apart, they are connected by a pilgrimage road. The route between them can be undertaken by bus or as I did by bicycle . Cycling between the shrines enabled me to also explore a handful of the 125 smaller shrines connected along the route.

The cycle route commences at Geku the Outer Shrine, located in the city of Ise the shrine is dedicated to Toyouke, the Shinto deity of clothing, food and housing. Located at the end of the route is the Inner shrine Naiku dedicated to the most venerated deity Amaterasu, the Sun Goddess. The entrance to all Shinto shrines is marked by a gate or tori, identifying the transition into a sacred area from the secular world. Lightly bowing under the gate shows respect to the Gods of the Shrine.

When visiting Naiku the larger of the two sites you then proceed to cross Uji Bridge stretching the Isszu River, The Sacred Forest of Ise Jingui can be seen crossing the river the forest is a source for the wood used to construct the holy shrines. Before entering the shrine you are required to purify yourself at a temizusha or water house. Firstly with your left hand filling a dipper with water and pouring the water over your right hand, then repeating with your left. Finally collecting more water with the dipper you pour water in to your right hand cupping the water and wash your mouth. At Naiku the purification is repeated in the Isszu River again using the same process of washing your hands and rising your mouth.

Walking around the Naiku complex a number of smaller shrines all with identical formation and design can be approached allowing a detailed view of the structure. The path for the complex then navigates you to large stone steps leading to main shrine in the complex. Due to the holiest of the shrine access is restricted, hidden behind large fences only the thatched roofs of the central structures can be viewed.

My interested in the shrines and reason to visit is due to the Shrines being both very old and very new. Old as they originate from 685 A.D, and new as the shrines and all the structures within the shrine complex are dismantled and completely rebuilt every twenty years. To ensure the exact replication of the shrines the new shrine construction is undertaken whilst the shrine soon to be dismantled stands, enabling the craftsmen to check dimensions and designs against the old shrine. For a short amount of time the two sites old and new stand side by side. The old shrine is then dismantled with the old material being distributed around the complex and to other Shinto shrines around Japan that are in need of material.

The site remains empty for 20 years with just a small hunt in the centre marking the place the shrine previously stood, and yet also marking the site for a new construction. This tradition of rebuilding keeps the buildings both new, ancient and original part of the Shinto belief in the death and renal in nature.

Before visiting the shrines I believed the process of rebuilding every 20 years was to ensure the original design intent of the shrines was consistently upheld, an alternative to European culture in which structures are allowed to age with some restoration. However if this was the case then why was the period of 20 years chosen to rebuild the shrines. During this period the shrines have barley aged, if the intent was to rebuild to prevent the decay of the structures they you would assume the period of rebuilding could be extend, it could even alter every time depending on how much the particular shrine had weathered. Further more why rebuild the whole structure, elements such as gold would out live wood times over, yet the whole structure is replaced during a ceremony.

Upon visiting the shrine I understood the regimented 20 year cycle is a time selected relevant to a human life. At the age of 20 within craftsman first rebuilding cycle he would start as an apprentice, during his second cycle at the age of 40 he would become a senior craftsman, his final third cycle at the age of 60 he would become the teacher. The development of machines and scientific technologyâ&amp;#x20AC;&amp;#x2122;s makes manual skills obsolete in many fields. However, by performing the Shikinen Sengu, traditional technologies are preserved, throughout generations.

The Shikinen Sengu process does preserves the initial design intend of the Shrines however not exactly as I initially believed. Alterations to the design have been made incremental over more than a millennium with each change as a direct response to a specific condition, or economic state. The cyclic of reconstruction is not unique to Ise Shrine but the rebuilding process at Ise is the largest and most highly revered of any shrine. In ancient and medieval time many shrines has reconstruction traditions and over 30 have survived in to the 21th century. They vary greatly in terms of cycle length, extent of work completed, and cultural significance.

The process of the Ise Jingui rebuilding spans 17 years and costs a total of 380 million pounds with the main portion of the physical work within the final 8 years, it includes over 30 ceremonyâ&amp;#x20AC;&amp;#x2122;s and festival, and the renewal of 60 shrines across the complex.

Misoma-hajimesai one of the initial ceremonies involves the cutting the most favourable tree. Young forestry staff train for the ceremony, practicing proper axe handling and traditional wood-cutting methods. Removing their helmets, the young men politely bowed to the trees, before lifted their axes, and cutting the tree appropriately an hour later the tree falls to the ground. This wood will be to be used as the core pillar of the new sanctuary.

The wood is then transported to the sanctuary via a festival called Okihiki-zome-shiki, or pulling logs ceremony. To reach the Naiku shrine the log is pulled via the Isuzu River, and to reach Geku the log is transported on land via carriages. These festivals involve several hundred thousand unskilled workers who are selected from around the country. Showing these ceremonies not only have local significance but national significant.

Due to the sacredness of the rebuilding process its is undertaken within a large temporary shed, protecting the process from weather animals and the public view. The tent also provides a structure from which a hand hoist can be operated, only traditional tools and crafts are allowed within the tent. During the building process a range of ceremonies are undertaken from the erection of the first pillar, lifting of the ridge pole and thatching of the roof. Around sixteen hundred shrine accessories are fabricated during each renewal, the process therefore not only preserving traditional construction but also a broad range of artefacts and craft skills.

The most important aspect of the rebuilding process is the transition of skills to the next generation. Originally the carpenters at Ise did not make extensive drawings to guide the work with most of the knowledge being past on orally. This then developed in to written descriptions of overall building dimensions, listing wood members and there sizes. This lack of drawings explains some of the alteration and accuracy uncertainties.Within the seventeenth century more comprehensive drawings were produced. The labour force for the rebuilding process consists of specialist workers with specialist skills specific to a material or craft. Carpenters the largest group are ranked according to their experience typically begin by working on the Uji Bridge which is completed four years ahead of other construction work.

Due to a carpenter learning the aesthetics and design as part of their training a greater number of people are qualified in the design decision making. With Architects involved within the process generally focusing on construction management than on the design. As these buildings have been rebuilt over 60 times the structures have been highly refined over the cycles and therefore alterations now are very minor. In ancient times workers were founded from the surrounding area today this construction labour continuous to be drawn from the surrounding area although highly skills carpenters are from a wider area.

From visiting the shrine I was amazed at even though many of the shrine were only a couple of years old having been rebuilt in 2013. Walking around the site it felt incredibly historic possibly because even though the materials were new, the environment was ancient. It gave this strange sense of experiencing looking at something new yet feeling it was old. .

Within the UK we are currently experiencing a lack of traditional craftsmanship which is in turn affecting the conservation of our heritage. Possibly in creating a new culture in which the passing of traditional skills is integral to the community could help preserve these skills. As part of my final year design project towards a Masters in Architecture. I am looking at this process of rebuilding in a more flexible approach for the process of self-build communities. Exploring the possibly of a self-built self-taught community that would pass on this skills to future generations through the adaptation of homes and community structures.