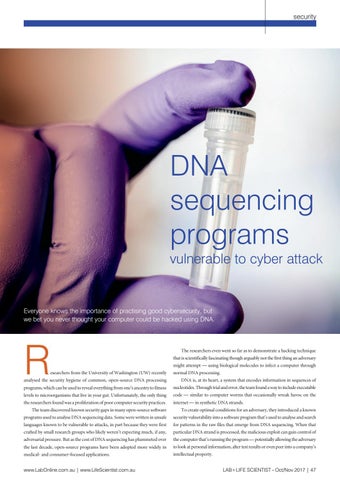 Everyone knows the importance of practising good cybersecurity, but we bet you never thought your computer could be hacked using DNA.

DNA is, at its heart, a system that encodes information in sequences of

programs, which can be used to reveal everything from one’s ancestry to fitness

nucleotides. Through trial and error, the team found a way to include executable

levels to microorganisms that live in your gut. Unfortunately, the only thing

code — similar to computer worms that occasionally wreak havoc on the

the researchers found was a proliferation of poor computer security practices.

esearchers from the University of Washington (UW) recently

The researchers even went so far as to demonstrate a hacking technique might attempt — using biological molecules to infect a computer through normal DNA processing.

The team discovered known security gaps in many open-source software

To create optimal conditions for an adversary, they introduced a known

programs used to analyse DNA sequencing data. Some were written in unsafe

languages known to be vulnerable to attacks, in part because they were first

for patterns in the raw files that emerge from DNA sequencing. When that

crafted by small research groups who likely weren’t expecting much, if any,

particular DNA strand is processed, the malicious exploit can gain control of

adversarial pressure. But as the cost of DNA sequencing has plummeted over

the computer that’s running the program — potentially allowing the adversary

the last decade, open-source programs have been adopted more widely in

to look at personal information, alter test results or even peer into a company’s