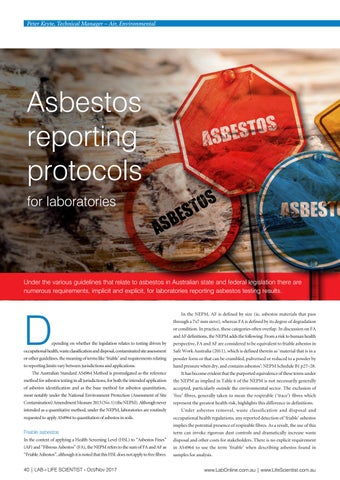 Under the various guidelines that relate to asbestos in Australian state and federal legislation there are numerous requirements, implicit and explicit, for laboratories reporting asbestos testing results.

In the NEPM, AF is defined by size (ie, asbestos materials that pass through a 7x7 mm sieve), whereas FA is defined by its degree of degradation or condition. In practice, these categories often overlap. In discussion on FA and AF definitions, the NEPM adds the following: From a risk to human health

epending on whether the legislation relates to testing driven by

perspective, FA and AF are considered to be equivalent to friable asbestos in

Safe Work Australia (2011), which is defined therein as ‘material that is in a

powder form or that can be crumbled, pulverised or reduced to a powder by

to reporting limits vary between jurisdictions and applications.

The Australian Standard AS4964 Method is promulgated as the reference

method for asbestos testing in all jurisdictions, for both the intended application

of asbestos identification and as the base method for asbestos quantitation,

accepted, particularly outside the environmental sector. The exclusion of

most notably under the National Environment Protection (Assessment of Site

Contamination) Amendment Measure 2013 (No. 1) (the NEPM). Although never

represent the greatest health risk, highlights this difference in definitions.

intended as a quantitative method, under the NEPM, laboratories are routinely requested to apply AS4964 to quantitation of asbestos in soils.

Under asbestos removal, waste classification and disposal and occupational health regulations, any reported detection of ‘friable’ asbestos implies the potential presence of respirable fibres. As a result, the use of this

disposal and other costs for stakeholders. There is no explicit requirement

(AF) and “Fibrous Asbestos” (FA), the NEPM refers to the sum of FA and AF as

“Friable Asbestos”, although it is noted that this HSL does not apply to free fibres.