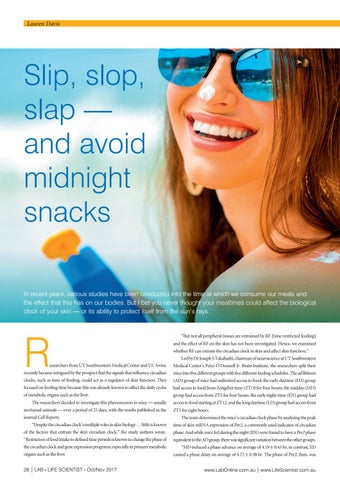 Slip, slop, slap — and avoid midnight snacks In recent years, various studies have been conducted into the time at which we consume our meals and the effect that this has on our bodies. But I bet you never thought your mealtimes could affect the biological clock of your skin — or its ability to protect itself from the sun’s rays.

“But not all peripheral tissues are entrained by RF [time-restricted feeding] and the effect of RF on the skin has not been investigated. Hence, we examined whether RF can entrain the circadian clock in skin and affect skin function.” Led by Dr Joseph S Takahashi, chairman of neuroscience at UT Southwestern

clocks, such as time of feeding, could act as a regulator of skin function. They

had access to food from Zeitgeber time (ZT) 0 for four hours; the midday (MD)

of metabolic organs such as the liver.

group had access from ZT5 for four hours; the early night-time (EN) group had

The researchers decided to investigate this phenomenon in mice — usually nocturnal animals — over a period of 25 days, with the results published in the journal Cell Reports.

access to food starting at ZT12; and the long daytime (LD) group had access from ZT3 for eight hours. The team determined the mice’s circadian clock phase by analysing the peak

time of skin mRNA expression of Per2, a commonly used indicator of circadian

of the factors that entrain the skin circadian clock,” the study authors wrote.

phase. And while mice fed during the night (EN) were found to have a Per2 phase

equivalent to the AD group, there was significant variation between the other groups.

organs such as the liver.