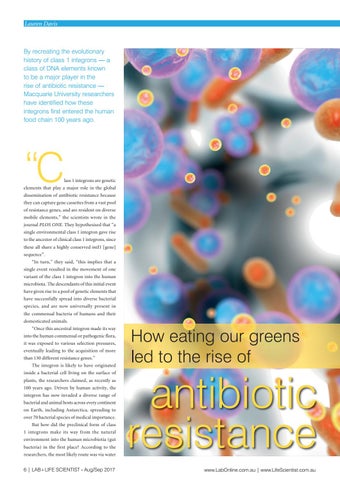 By recreating the evolutionary history of class 1 integrons — a class of DNA elements known to be a major player in the rise of antibiotic resistance — Macquarie University researchers have identified how these integrons first entered the human food chain 100 years ago.

elements that play a major role in the global dissemination of antibiotic resistance because they can capture gene cassettes from a vast pool of resistance genes, and are resident on diverse mobile elements,” the scientists wrote in the journal PLOS ONE. They hypothesised that “a single environmental class 1 integron gave rise to the ancestor of clinical class 1 integrons, since these all share a highly conserved intI1 [gene] sequence”. “In turn,” they said, “this implies that a single event resulted in the movement of one variant of the class 1 integron into the human microbiota. The descendants of this initial event have given rise to a pool of genetic elements that have successfully spread into diverse bacterial species, and are now universally present in the commensal bacteria of humans and their domesticated animals. “Once this ancestral integron made its way into the human commensal or pathogenic flora, it was exposed to various selection pressures, eventually leading to the acquisition of more than 130 different resistance genes.” The integron is likely to have originated

How eating our greens led to the rise of

researchers, the most likely route was via water

inside a bacterial cell living on the surface of plants, the researchers claimed, as recently as 100 years ago. Driven by human activity, the integron has now invaded a diverse range of bacterial and animal hosts across every continent on Earth, including Antarctica, spreading to over 70 bacterial species of medical importance. But how did the preclinical form of class 1 integrons make its way from the natural environment into the human microbiotia (gut bacteria) in the first place? According to the