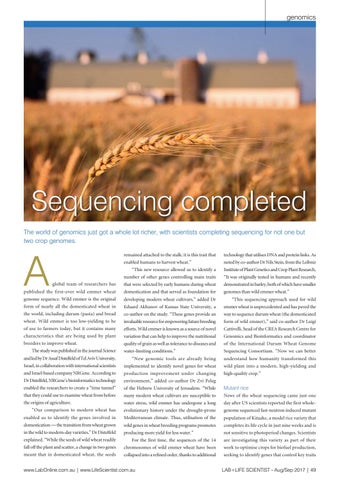 Sequencing completed The world of genomics just got a whole lot richer, with scientists completing sequencing for not one but two crop genomes.

remained attached to the stalk; it is this trait that

technology that utilises DNA and protein links. As

noted by co-author Dr Nils Stein, from the Leibniz

“This new resource allowed us to identify a

“It was originally tested in humans and recently

global team of researchers has

that were selected by early humans during wheat

demonstrated in barley, both of which have smaller

domestication and that served as foundation for

“This sequencing approach used for wild

form of nearly all the domesticated wheat in

emmer wheat is unprecedented and has paved the

the world, including durum (pasta) and bread

co-author on the study. “These genes provide an

wheat. Wild emmer is too low-yielding to be

of use to farmers today, but it contains many

efforts. Wild emmer is known as a source of novel

Cattivelli, head of the CREA Research Centre for

characteristics that are being used by plant

variation that can help to improve the nutritional

Genomics and Bioinformatics and coordinator

quality of grain as well as tolerance to diseases and

of the International Durum Wheat Genome

Sequencing Consortium. “Now we can better

The study was published in the journal Science and led by Dr Assaf Distelfeld of Tel Aviv University,

“New genomic tools are already being

understand how humanity transformed this

Israel, in collaboration with international scientists

wild plant into a modern, high-yielding and

and Israel-based company NRGene. According to

enabled the researchers to create a “time tunnel”

of the Hebrew University of Jerusalem. “While

that they could use to examine wheat from before

many modern wheat cultivars are susceptible to

News of the wheat sequencing came just one

the origins of agriculture.

day after US scientists reported the first whole-

“Our comparison to modern wheat has

evolutionary history under the drought-prone

enabled us to identify the genes involved in

Mediterranean climate. Thus, utilisation of the

population of Kitaake, a model rice variety that

domestication — the transition from wheat grown

completes its life cycle in just nine weeks and is

in the wild to modern-day varieties,” Dr Distelfeld

not sensitive to photoperiod changes. Scientists

explained. “While the seeds of wild wheat readily

For the first time, the sequences of the 14

are investigating this variety as part of their

fall off the plant and scatter, a change in two genes

chromosomes of wild emmer wheat have been

meant that in domesticated wheat, the seeds

collapsed into a refined order, thanks to additional