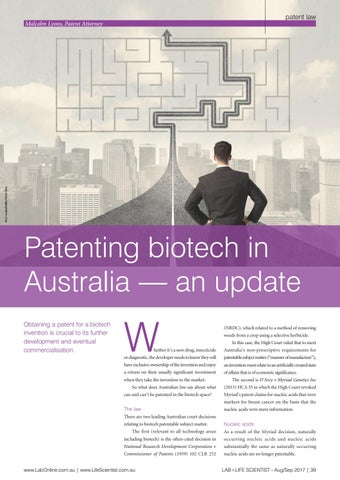 Patenting biotech in Australia — an update Obtaining a patent for a biotech invention is crucial to its further development and eventual commercialisation.

(NRDC), which related to a method of removing weeds from a crop using a selective herbicide. In this case, the High Court ruled that to meet

or diagnostic, the developer needs to know they will

have exclusive ownership of the invention and enjoy

an invention must relate to an artificially created state

a return on their usually significant investment

of affairs that is of economic significance.

when they take the invention to the market. So what does Australian law say about what can and can’t be patented in the biotech space?

The first (relevant to all technology areas

As a result of the Myriad decision, naturally

including biotech) is the often-cited decision in

substantially the same as naturally occurring

nucleic acids are no longer patentable.