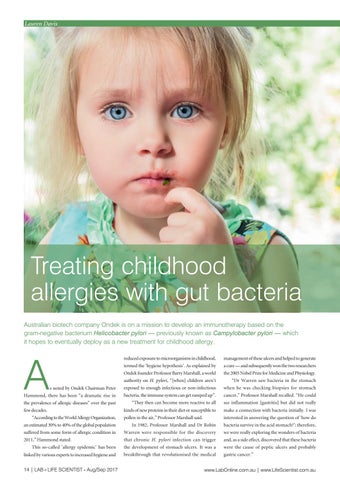 reduced exposure to microorganisms in childhood,

management of these ulcers and helped to generate

termed the ‘hygiene hypothesis’. As explained by

a cure — and subsequently won the two researchers

the 2005 Nobel Prize for Medicine and Physiology.

exposed to enough infectious or non-infectious

when he was checking biopsies for stomach

Hammond, there has been “a dramatic rise in

bacteria, the immune system can get ramped up”.

cancer,” Professor Marshall recalled. “He could

the prevalence of allergic diseases” over the past

“They then can become more reactive to all

see inflammation [gastritis] but did not really

kinds of new proteins in their diet or susceptible to

make a connection with bacteria initially. I was

few decades. “According to the World Allergy Organization, an estimated 30% to 40% of the global population

In 1982, Professor Marshall and Dr Robin

suffered from some form of allergic condition in

Warren were responsible for the discovery

we were really exploring the wonders of bacteria

and, as a side effect, discovered that these bacteria

This so-called ‘allergy epidemic’ has been

the development of stomach ulcers. It was a

were the cause of peptic ulcers and probably

linked by various experts to increased hygiene and

breakthrough that revolutionised the medical