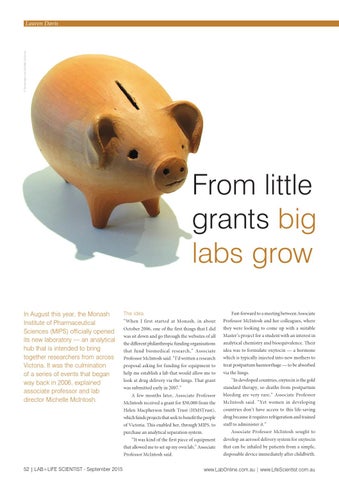 From little grants big labs grow In August this year, the Monash Institute of Pharmaceutical Sciences (MIPS) officially opened its new laboratory — an analytical hub that is intended to bring together researchers from across Victoria. It was the culmination of a series of events that began way back in 2006, explained associate professor and lab director Michelle McIntosh.

Fast-forward to a meeting between Associate

“When I first started at Monash, in about

Professor McIntosh and her colleagues, where

October 2006, one of the first things that I did

they were looking to come up with a suitable

was sit down and go through the websites of all

Master’s project for a student with an interest in

analytical chemistry and bioequivalence. Their

idea was to formulate oxytocin — a hormone

which is typically injected into new mothers to

proposal asking for funding for equipment to

treat postpartum haemorrhage — to be absorbed

help me establish a lab that would allow me to

look at drug delivery via the lungs. That grant A few months later, Associate Professor

McIntosh said. “Yet women in developing

which funds projects that seek to benefit the people

drug because it requires refrigeration and trained

of Victoria. This enabled her, through MIPS, to

staff to administer it.” Associate Professor McIntosh sought to

“In developed countries, oxytocin is the gold standard therapy, so deaths from postpartum

“It was kind of the first piece of equipment

that allowed me to set up my own lab,” Associate

that can be inhaled by patients from a simple,