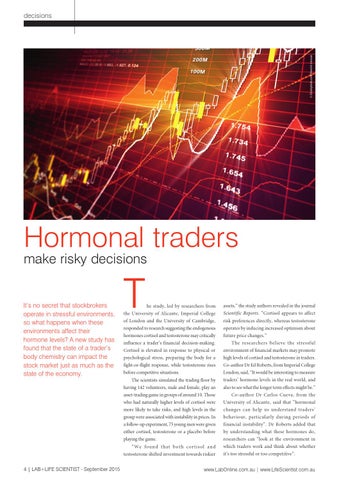 It’s no secret that stockbrokers operate in stressful environments, so what happens when these environments affect their hormone levels? A new study has found that the state of a trader’s body chemistry can impact the stock market just as much as the state of the economy.

he study, led by researchers from

assets,” the study authors revealed in the journal

the University of Alicante, Imperial College

of London and the University of Cambridge,

responded to research suggesting the endogenous

operates by inducing increased optimism about

hormones cortisol and testosterone may critically

The researchers believe the stressful

Cortisol is elevated in response to physical or

environment of financial markets may promote

psychological stress, preparing the body for a

high levels of cortisol and testosterone in traders.

London, said, “It would be interesting to measure

The scientists simulated the trading floor by

traders’ hormone levels in the real world, and

having 142 volunteers, male and female, play an

also to see what the longer term effects might be.”

asset-trading game in groups of around 10. Those

Co-author Dr Carlos Cueva, from the

who had naturally higher levels of cortisol were

University of Alicante, said that “hormonal

more likely to take risks, and high levels in the

changes can help us understand traders’

group were associated with instability in prices. In

behaviour, particularly during periods of

a follow-up experiment, 75 young men were given

either cortisol, testosterone or a placebo before

by understanding what these hormones do,

researchers can “look at the environment in

“We found that both cortisol and testosterone shifted investment towards riskier

which traders work and think about whether it’s too stressful or too competitive”.