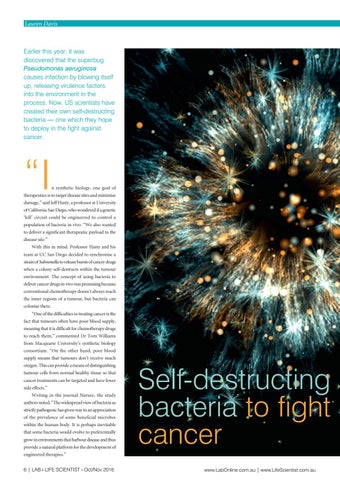 Earlier this year, it was discovered that the superbug Pseudomonas aeruginosa causes infection by blowing itself up, releasing virulence factors into the environment in the process. Now, US scientists have created their own self-destructing bacteria — one which they hope to deploy in the fight against cancer.

n synthetic biology, one goal of

therapeutics is to target disease sites and minimise damage,” said Jeff Hasty, a professor at University of California San Diego, who wondered if a genetic ‘kill’ circuit could be engineered to control a population of bacteria in vivo. “We also wanted to deliver a significant therapeutic payload to the disease site.” With this in mind, Professor Hasty and his team at UC San Diego decided to synchronise a strain of Salmonella to release bursts of cancer drugs when a colony self-destructs within the tumour environment. The concept of using bacteria to deliver cancer drugs in vivo was promising because conventional chemotherapy doesn’t always reach the inner regions of a tumour, but bacteria can colonise there. “One of the difficulties in treating cancer is the fact that tumours often have poor blood supply, meaning that it is difficult for chemotherapy drugs to reach them,” commented Dr Tom Williams from Macquarie University’s synthetic biology consortium. “On the other hand, poor blood supply means that tumours don’t receive much oxygen. This can provide a means of distinguishing tumour cells from normal healthy tissue so that cancer treatments can be targeted and have fewer side effects.” Writing in the journal Nature, the study authors noted, “The widespread view of bacteria as strictly pathogenic has given way to an appreciation of the prevalence of some beneficial microbes within the human body. It is perhaps inevitable that some bacteria would evolve to preferentially grow in environments that harbour disease and thus provide a natural platform for the development of