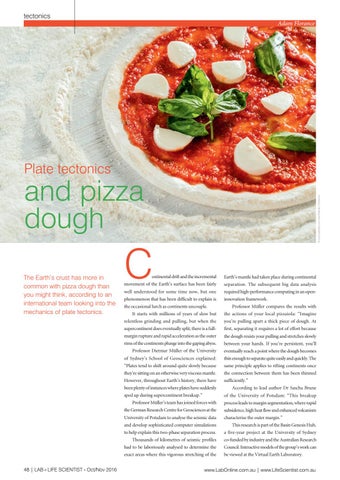 The Earth’s crust has more in common with pizza dough than you might think, according to an international team looking into the mechanics of plate tectonics.

ontinental drift and the incremental

movement of the Earth’s surface has been fairly

well understood for some time now, but one

required high-performance computing in an open-

phenomenon that has been difficult to explain is

the occasional lurch as continents uncouple.

the actions of your local pizzaiola: “Imagine

relentless grinding and pulling, but when the

you’re pulling apart a thick piece of dough. At

supercontinent does eventually split, there is a full-

first, separating it requires a lot of effort because

margin rupture and rapid acceleration as the outer

the dough resists your pulling and stretches slowly

rims of the continents plunge into the gaping abyss.

between your hands. If you’re persistent, you’ll

Professor Dietmar Müller of the University

eventually reach a point where the dough becomes

of Sydney’s School of Geosciences explained:

thin enough to separate quite easily and quickly. The

“Plates tend to shift around quite slowly because

the connection between them has been thinned

However, throughout Earth’s history, there have

been plenty of instances where plates have suddenly sped up during supercontinent breakup.”

Professor Müller compares the results with

It starts with millions of years of slow but

According to lead author Dr Sascha Brune of the University of Potsdam: “This breakup

the German Research Centre for Geosciences at the

University of Potsdam to analyse the seismic data

This research is part of the Basin Genesis Hub,

a five-year project at the University of Sydney

Thousands of kilometres of seismic profiles

co-funded by industry and the Australian Research

had to be laboriously analysed to determine the

Council. Interactive models of the group’s work can

exact areas where this vigorous stretching of the

be viewed at the Virtual Earth Laboratory.