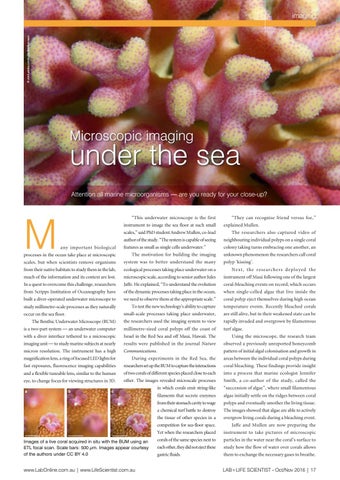 under the sea Attention all marine microorganisms — are you ready for your close-up?

“They can recognise friend versus foe,” explained Mullen.

The researchers also captured video of

author of the study. “The system is capable of seeing

colony taking turns embracing one another, an

processes in the ocean take place at microscopic

The motivation for building the imaging

scales, but when scientists remove organisms

system was to better understand the many

from their native habitats to study them in the lab,

Next, the researchers deployed the

much of the information and its context are lost.

instrument off Maui following one of the largest

In a quest to overcome this challenge, researchers

Jaffe. He explained, “To understand the evolution

coral-bleaching events on record, which occurs

from Scripps Institution of Oceanography have

of the dynamic processes taking place in the ocean,

when single-celled algae that live inside the

built a diver-operated underwater microscope to

we need to observe them at the appropriate scale.”

To test the new technology’s ability to capture

are still alive, but in their weakened state can be

the researchers used the imaging system to view

rapidly invaded and overgrown by filamentous

is a two-part system — an underwater computer

millimetre-sized coral polyps off the coast of

with a diver interface tethered to a microscopic

Israel in the Red Sea and off Maui, Hawaii. The

Using the microscope, the research team

results were published in the journal Nature

micron resolution. The instrument has a high

pattern of initial algal colonisation and growth in

study millimetre-scale processes as they naturally occur on the sea floor.

magnification lens, a ring of focused LED lights for

During experiments in the Red Sea, the

areas between the individual coral polyps during

researchers set up the BUM to capture the interactions

and a flexible tuneable lens, similar to the human

of two corals of different species placed close to each

into a process that marine ecologist Jennifer

eye, to change focus for viewing structures in 3D.

other. The images revealed microscale processes

Smith, a co-author of the study, called the

in which corals emit string-like

“succession of algae”, where small filamentous

algae initially settle on the ridges between coral

from their stomach cavity to wage

a chemical turf battle to destroy

The images showed that algae are able to actively

the tissue of other species in a

Images of a live coral acquired in situ with the BUM using an ETL focal scan. Scale bars: 500 µm. Images appear courtesy of the authors under CC BY 4.0

Jaffe and Mullen are now preparing the

Yet when the researchers placed

instrument to take pictures of microscopic

corals of the same species next to

particles in the water near the coral’s surface to

each other, they did not eject these

study how the flow of water over corals allows

them to exchange the necessary gases to breathe.