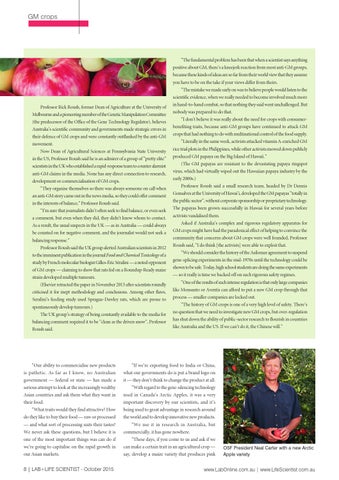 “The fundamental problem has been that when a scientist says anything positive about GM, there’s a kneejerk reaction from most anti-GM groups, because these kinds of ideas are so far from their world view that they assume you have to be on the take if your views differ from theirs. “The mistake we made early on was to believe people would listen to the scientific evidence, when we really needed to become involved much more Professor Rick Roush, former Dean of Agriculture at the University of Melbourne and a pioneering member of the Genetic Manipulation Committee (the predecessor of the Office of the Gene Technology Regulator), believes Australia’s scientific community and governments made strategic errors in their defence of GM crops and were constantly outflanked by the anti-GM movement. Now Dean of Agricultural Sciences at Pennsylvania State University in the US, Professor Roush said he is an admirer of a group of “pretty elite” scientists in the UK who established a rapid-response team to counter alarmist anti-GM claims in the media. None has any direct connection to research, development or commercialisation of GM crops. “They organise themselves so there was always someone on call when an anti-GM story came out in the news media, so they could offer comment in the interests of balance,” Professor Roush said. “I’m sure that journalists didn’t often seek to find balance, or even seek a comment, but even when they did, they didn’t know whom to contact. As a result, the usual suspects in the UK — as in Australia — could always be counted on for negative comment, and the journalist would not seek a balancing response.” Professor Roush said the UK group alerted Australian scientists in 2012 to the imminent publication in the journal Food and Chemical Toxicology of a study by French molecular biologist Gilles-Éric Séralini — a noted opponent of GM crops — claiming to show that rats fed on a Roundup-Ready maize strain developed multiple tumours. (Elsevier retracted the paper in November 2013 after scientists roundly criticised it for inept methodology and conclusions. Among other flaws, Seralini’s feeding study used Sprague-Dawley rats, which are prone to spontaneously develop tumours.) The UK group’s strategy of being constantly available to the media for balancing comment required it to be “clean as the driven snow”, Professor Roush said.

in hand-to-hand combat, so that nothing they said went unchallenged. But nobody was prepared to do that. “I don’t believe it was really about the need for crops with consumerbenefiting traits, because anti-GM groups have continued to attack GM crops that had nothing to do with multinational control of the food supply. “Literally in the same week, activists attacked vitamin A-enriched GM rice trial plots in the Philippines, while other activists mowed down publicly produced GM papaya on the Big Island of Hawaii.” (The GM papayas are resistant to the devastating papaya ringspot virus, which had virtually wiped out the Hawaiian papaya industry by the early 2000s.) Professor Roush said a small research team, headed by Dr Dennis Gonsalves at the University of Hawai‘i, developed the GM papayas “totally in the public sector”, without corporate sponsorship or proprietary technology. The papayas been grown successfully in Hawaii for several years before activists vandalised them. Asked if Australia’s complex and rigorous regulatory apparatus for GM crops might have had the paradoxical effect of helping to convince the community that concerns about GM crops were well founded, Professor Roush said, “I do think [the activists] were able to exploit that. “We should consider the history of the Asilomar agreement to suspend gene-splicing experiments in the mid-1970s until the technology could be shown to be safe. Today, high school students are doing the same experiments — so it really is time we backed off on such rigorous safety regimes. “One of the results of such intense regulation is that only large companies like Monsanto or Aventis can afford to put a new GM crop through that process — smaller companies are locked out. “The history of GM crops is one of a very high level of safety. There’s no question that we need to investigate new GM crops, but over-regulation has shut down the ability of public-sector research to flourish in countries like Australia and the US. If we can’t do it, the Chinese will.”

“Our ability to commercialise new products

“If we’re exporting food to India or China,

is pathetic. As far as I know, no Australian

what our governments do is put a brand logo on

government — federal or state — has made a

it — they don’t think to change the product at all.

serious attempt to look at the increasingly wealthy

“With regard to the gene-silencing technology

Asian countries and ask them what they want in

used in Canada’s Arctic Apples, it was a very

important discovery by our scientists, and it’s

“What traits would they find attractive? How

being used to great advantage in research around

do they like to buy their food — raw or processed

the world and to develop innovative new products.

— and what sort of processing suits their tastes? We never ask these questions, but I believe it is

“We use it in research in Australia, but commercially, it has gone nowhere.

one of the most important things was can do if

“These days, if you come to us and ask if we

we’re going to capitalise on the rapid growth in

can make a certain trait in an agricultural crop —