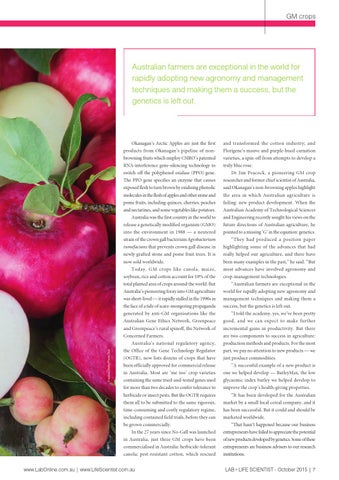 Australian farmers are exceptional in the world for rapidly adopting new agronomy and management techniques and making them a success, but the genetics is left out.

and transformed the cotton industry; and

products from Okanagan’s pipeline of non-

varieties, a spin-off from attempts to develop a

The PPO gene specifies an enzyme that causes

molecules in the flesh of apples and other stone and

the area in which Australian agriculture is

failing: new product development. When the

Australia was the first country in the world to

and Engineering recently sought his views on the

future directions of Australian agriculture, he

into the environment in 1988 — a neutered

pointed to a missing ‘G’ in the equation: genetics.

“They had produced a position paper

highlighting some of the advances that had

newly grafted stone and pome fruit trees. It is

really helped our agriculture, and there have

been many examples in the past,” he said. “But

most advances have involved agronomy and crop-management technologies.

total planted area of crops around the world. But

“Australian farmers are exceptional in the

was short-lived — it rapidly stalled in the 1990s in

management techniques and making them a

the face of a tide of scare-mongering propaganda

success, but the genetics is left out.

“I told the academy, yes, we’ve been pretty

good, and we can expect to make further

and Greenpeace’s rural spinoff, the Network of

incremental gains in productivity. But there

are two components to success in agriculture:

production methods and products. For the most

the Office of the Gene Technology Regulator

part, we pay no attention to new products — we

(OGTR), now lists dozens of crops that have

been officially approved for commercial release

“A successful example of a new product is

in Australia. Most are ‘me too’ crop varieties

one we helped develop — BarleyMax, the low

for more than two decades to confer tolerance to

herbicide or insect pests. But the OGTR requires

“It has been developed for the Australian

them all to be submitted to the same rigorous,

market by a small local cereal company, and it

has been successful. But it could and should be

including contained field trials, before they can

“That hasn’t happened because our business

In the 27 years since No-Gall was launched

entrepreneurs have failed to appreciate the potential

in Australia, just three GM crops have been

of new products developed by genetics. Some of these

entrepreneurs are business advisers to our research