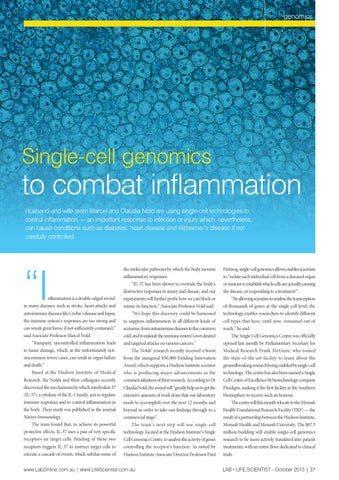 to combat inflammation Husband-and-wife team Marcel and Claudia Nold are using single-cell technologies to control inflammation — an important response to infection or injury which, nevertheless, can cause conditions such as diabetes, heart disease and Alzheimer’s disease if not carefully controlled.

the molecular pathways by which the body mounts

to “isolate each individual cell from a diseased organ

“IL-37 has been shown to override the body’s destructive responses to injury and disease, and our

or tumour to establish which cells are actually causing the disease, or responding to a treatment”.

nflammation is a double-edged sword:

experiments will further probe how we can block or

“By allowing scientists to analyse the transcription

in many diseases, such as stroke, heart attacks and

of thousands of genes at the single-cell level, the

“We hope this discovery could be harnessed

the immune system’s responses are too strong and

to suppress inflammation in all different kinds of

cell types that have, until now, remained out of

can wreak great havoc if not sufficiently contained,”

scenarios, from autoimmune diseases to the common

cold, and to unleash the immune system’s own desired

and targeted attacks on various cancers.”

to tissue damage, which, in the unfortunately not-

from the inaugural $50,000 Fielding Innovation

the state-of-the-art facility to learn about the

groundbreaking research being enabled by single-cell

Based at the Hudson Institute of Medical

who is producing major advancements in the

technology. The centre has also been named a Single

Research, the Nolds and their colleagues recently

commercialisation of their research. According to Dr

discovered the mechanisms by which interleukin 37

Claudia Nold, the award will “greatly help us to get the

Fluidigm, making it the first facility in the Southern

extensive amount of work done that our laboratory

Hemisphere to receive such an honour.

immune responses and to control inflammation in

needs to accomplish over the next 12 months and

The centre will this month relocate to the Monash

the body. Their study was published in the journal

beyond in order to take our findings through to a

result of a partnership between the Hudson Institute,

The team found that, to achieve its powerful

The team’s next step will use single-cell

Monash Health and Monash University. The $87.5

receptors on target cells. Binding of these two

Cell Genomics Centre, to analyse the activity of genes

research to be more actively translated into patient

controlling the receptor’s function. As noted by

treatments, with an entire floor dedicated to clinical

execute a cascade of events, which subdue some of