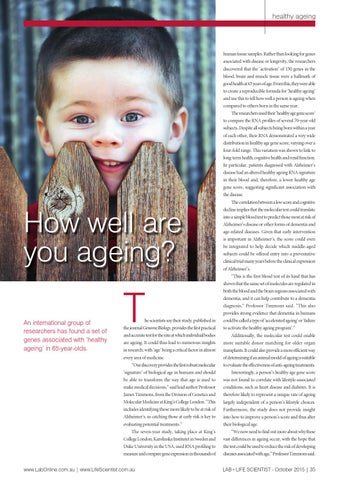 human tissue samples. Rather than looking for genes associated with disease or longevity, the researchers discovered that the ‘activation’ of 150 genes in the blood, brain and muscle tissue were a hallmark of good health at 65 years of age. From this, they were able to create a reproducible formula for ‘healthy ageing’ and use this to tell how well a person is ageing when compared to others born in the same year. The researchers used their ‘healthy age gene score’ to compare the RNA profiles of several 70-year-old subjects. Despite all subjects being born within a year of each other, their RNA demonstrated a very wide distribution in healthy age gene score, varying over a four-fold range. This variation was shown to link to long-term health, cognitive health and renal function. In particular, patients diagnosed with Alzheimer’s disease had an altered healthy ageing RNA signature in their blood and, therefore, a lower healthy age gene score, suggesting significant association with the disease. The correlation between a low score and cognitive

An international group of researchers has found a set of genes associated with ‘healthy ageing’ in 65-year-olds.

into a simple blood test to predict those most at risk of Alzheimer’s disease or other forms of dementia and age-related diseases. Given that early intervention © bonniemarie/Dollar Photo Club

How well are you ageing?

decline implies that the molecular test could translate

he scientists say their study, published in

is important in Alzheimer’s, the score could even be integrated to help decide which middle-aged subjects could be offered entry into a preventative clinical trial many years before the clinical expression of Alzheimer’s. “This is the first blood test of its kind that has shown that the same set of molecules are regulated in both the blood and the brain regions associated with dementia, and it can help contribute to a dementia diagnosis,” Professor Timmons said. “This also provides strong evidence that dementia in humans could be called a type of ‘accelerated ageing’ or ‘failure to activate the healthy ageing program’.”

and accurate test for the rate at which individual bodies

Additionally, the molecular test could enable

are ageing. It could thus lead to numerous insights

in research, with ‘age’ being a critical factor in almost

transplants. It could also provide a more efficient way

every area of medicine.

of determining if an animal model of ageing is suitable

to evaluate the effectiveness of anti-ageing treatments.

‘signature’ of biological age in humans and should

be able to transform the way that age is used to

was not found to correlate with lifestyle-associated

conditions, such as heart disease and diabetes. It is

James Timmons, from the Division of Genetics and

therefore likely to represent a unique rate of ageing

includes identifying those more likely to be at risk of

Furthermore, the study does not provide insight

Alzheimer’s, as catching those at early risk is key to

into how to improve a person’s score and thus alter

“We now need to find out more about why these

vast differences in ageing occur, with the hope that

Duke University in the USA, used RNA profiling to

the test could be used to reduce the risk of developing

measure and compare gene expression in thousands of