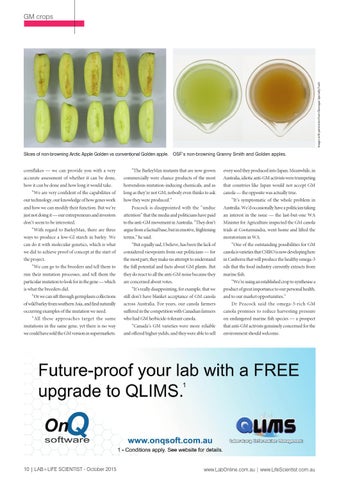 cornflakes — we can provide you with a very

“The BarleyMax mutants that are now grown

every seed they produced into Japan. Meanwhile, in

accurate assessment of whether it can be done,

commercially were chance products of the most

how it can be done and how long it would take.

horrendous mutation-inducing chemicals, and as

long as they’re not GM, nobody even thinks to ask

canola — the opposite was actually true.

“We are very confident of the capabilities of our technology, our knowledge of how genes work

“It’s symptomatic of the whole problem in

how they were produced.”

and how we can modify their function. But we’re

Peacock is disappointed with the “undue

just not doing it — our entrepreneurs and investors

attention” that the media and politicians have paid

an interest in the issue — the last-but-one WA

to the anti-GM movement in Australia. “They don’t

argue from a factual base, but in emotive, frightening

trials at Cootamundra, went home and lifted the

“With regard to BarleyMax, there are three ways to produce a low-GI starch in barley. We can do it with molecular genetics, which is what

“But equally sad, I believe, has been the lack of

“One of the outstanding possibilities for GM

we did to achieve proof of concept at the start of

considered viewpoints from our politicians — for

canola is varieties that CSIRO is now developing here

the most part, they make no attempt to understand

in Canberra that will produce the healthy omega-3

“We can go to the breeders and tell them to

the full potential and facts about GM plants. But

oils that the food industry currently extracts from

run their mutation processes, and tell them the

they do react to all the anti-GM noise because they

particular mutation to look for in the gene — which

are concerned about votes.

is what the breeders did.

“We’re using an established crop to synthesise a

“It’s really disappointing, for example, that we

product of great importance to our personal health,

“Or we can sift through germplasm collections

of wild barley from southern Asia, and find naturally

across Australia. For years, our canola farmers

occurring examples of the mutation we need.

suffered in the competition with Canadian farmers

who had GM herbicide-tolerant canola.

“All these approaches target the same mutations in the same gene, yet there is no way

we could have sold the GM version in supermarkets.

and offered higher yields, and they were able to sell

and to our market opportunities.”

that anti-GM activists genuinely concerned for the environment should welcome.