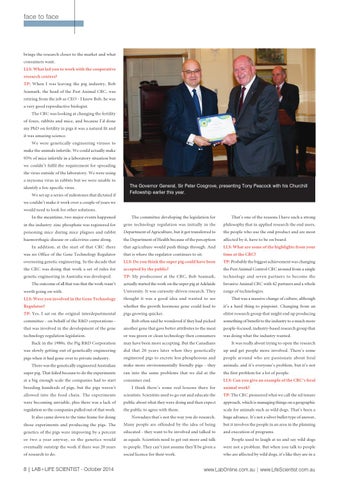 brings the research closer to the market and what consumers want. LLS: What led you to work with the cooperative research centres? TP: When I was leaving the pig industry, Bob Seamark, the head of the Pest Animal CRC, was retiring from the job as CEO - I knew Bob, he was a very good reproductive biologist. The CRC was looking at changing the fertility of foxes, rabbits and mice, and because I’d done my PhD on fertility in pigs it was a natural fit and it was amazing science. We were genetically engineering viruses to make the animals infertile. We could actually make 95% of mice infertile in a laboratory situation but we couldn’t fulfil the requirement for spreading the virus outside of the laboratory. We were using a myxoma virus in rabbits but we were unable to identify a fox-specific virus. We set up a series of milestones that dictated if

we couldn’t make it work over a couple of years we would need to look for other solutions. In the meantime, two major events happened

The committee developing the legislation for

That’s one of the reasons I have such a strong

in the industry: zinc phosphate was registered for

gene technology regulation was initially in the

philosophy that in applied research the end users,

Department of Agriculture, but it got transferred to

the people who use the end product and are most

haemorrhagic disease or calicivirus came along.

the Department of Health because of the perception

affected by it, have to be on board.

that agriculture would push things through. And

LLS: What are some of the highlights from your

was no Office of the Gene Technology Regulator

that is where the regulator continues to sit.

time at the CRC?

overseeing genetic engineering. In the decade that

LLS: Do you think the super pig could have been

the CRC was doing that work a set of rules for

accepted by the public?

the Pest Animal Control CRC around from a single

genetic engineering in Australia was developed.

TP: My predecessor at the CRC, Bob Seamark,

technology and seven partners to become the

actually started the work on the super pig at Adelaide

Invasive Animal CRC with 42 partners and a whole

worth going on with.

University. It was curiosity-driven research. They

LLS: Were you involved in the Gene Technology

thought it was a good idea and wanted to see

That was a massive change of culture, although

whether the growth hormone gene could lead to

it’s a hard thing to pinpoint. Changing from an

TP: Yes, I sat on the original interdepartmental

In addition, at the start of that CRC there

The outcome of all that was that the work wasn’t

committee - on behalf of the R&amp;D corporations -

Bob often said he wondered if they had picked

something of benefit to the industry to a much more

that was involved in the development of the gene

another gene that gave better attributes to the meat

or was green or clean technology then consumers

was doing what the industry wanted.

may have been more accepting. But the Canadians

It was really about trying to open the research

was slowly getting out of genetically engineering

did that 20 years later when they genetically

up and get people more involved. There’s some

pigs when it had gone over to private industry.

people around who are passionate about feral

There was the genetically engineered Australian

animals, and it’s everyone’s problem, but it’s not

super pig. That failed because to do the experiments

ran into the same problems that we did at the

the first problem for a lot of people.

at a big enough scale the companies had to start

LLS: Can you give an example of the CRC’s feral animal work?

breeding hundreds of pigs, but the pigs weren’t

I think there’s some real lessons there for

allowed into the food chain. The experiments

scientists. Scientists used to go out and educate the

TP: The CRC pioneered what we call the nil tenure

were becoming unviable, plus there was a lack of

public about what they were doing and then expect

approach, which is managing things on a geographic

regulation so the companies pulled out of that work.

the public to agree with them.

scale for animals such as wild dogs. That’s been a

It also came down to the time frame for doing

Nowadays that’s not the way you do research.

huge advance. It’s not a silver bullet type of answer,

those experiments and producing the pigs. The

Many people are offended by the idea of being

but it involves the people in an area in the planning

genetics of the pigs were improving by a percent

educated - they want to be involved and talked to

and execution of programs.

or two a year anyway, so the genetics would

as equals. Scientists need to get out more and talk

People used to laugh at us and say wild dogs

eventually outstrip the work if there was 20 years

to people. They can’t just assume they’ll be given a

were not a problem. But when you talk to people

of research to do.

social licence for their work.

who are affected by wild dogs, it’s like they are in a