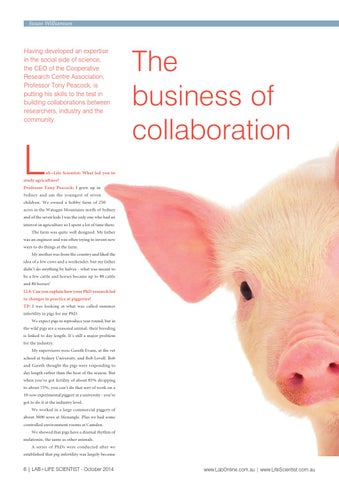 Having developed an expertise in the social side of science, the CEO of the Cooperative Research Centre Association, Professor Tony Peacock, is putting his skills to the test in building collaborations between researchers, industry and the community.

The business of collaboration

ab+Life Scientist: What led you to

study agriculture? Professor Tony Peacock: I grew up in Sydney and am the youngest of seven children. We owned a hobby farm of 250 acres in the Watagan Mountains north of Sydney and of the seven kids I was the only one who had an interest in agriculture so I spent a lot of time there. The farm was quite well designed. My father was an engineer and was often trying to invent new ways to do things at the farm. My mother was from the country and liked the idea of a few cows and a weekender, but my father didn’t do anything by halves - what was meant to be a few cattle and horses became up to 80 cattle and 80 horses! LLS: Can you explain how your PhD research led to changes in practice at piggeries? TP: I was looking at what was called summer infertility in pigs for my PhD. We expect pigs to reproduce year round, but in the wild pigs are a seasonal animal, their breeding is linked to day length. It’s still a major problem for the industry. My supervisors were Gareth Evans, at the vet school at Sydney University, and Bob Lovell. Bob and Gareth thought the pigs were responding to day length rather than the heat of the season. But when you’ve got fertility of about 85% dropping to about 75%, you can’t do that sort of work on a 10-sow experimental piggery at a university - you’ve got to do it at the industry level. We worked in a large commercial piggery of about 3000 sows at Menangle. Plus we had some controlled environment rooms at Camden. We showed that pigs have a diurnal rhythm of melatonin, the same as other animals. A series of PhDs were conducted after we established that pig infertility was largely because