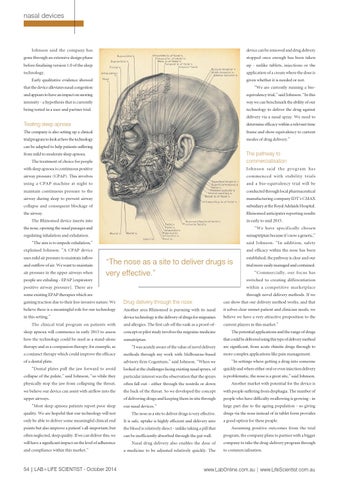 Johnson said the company has

device can be removed and drug delivery

gone through an extensive design phase

stopped once enough has been taken

before finalising version 1.0 of the sleep

up - unlike tablets, injections or the

application of a cream where the dose is given whether it is needed or not.

“We are currently running a bio-

and appears to have an impact on snoring

equivalency trial,” said Johnson. “In this

intensity - a hypothesis that is currently

way we can benchmark the ability of our

being tested in a user and partner trial.

technology to deliver the drug against delivery via a nasal spray. We need to

determine efficacy within a relevant time

The company is also setting up a clinical

frame and show equivalency to current

trial program to look at how the technology

can be adapted to help patients suffering

The pathway to commercialisation

from mild to moderate sleep apnoea. The treatment of choice for people with sleep apnoea is continuous positive

Johnson said the program has

using a CPAP machine at night to

and a bio-equivalency trial will be

maintain continuous pressure to the

airway during sleep to prevent airway

collapse and consequent blockage of

subsidiary at the Royal Adelaide Hospital.

The Rhinomed device inserts into

“We have specifically chosen

the nose, opening the nasal passages and

sumaptriptan because it’s now a generic,”

regulating inhalation and exhalation. “The aim is to impede exhalation,”

and efficacy within the nose has been

“The nose as a site to deliver drugs is very effective.”

established, the pathway is clear and our trial more easily managed and contained. “Commercially, our focus has

positive airway pressure]. There are

within a competitive marketplace through novel delivery methods. If we

some existing EPAP therapies which are gaining traction due to their less-invasive nature. We

Drug delivery through the nose

can show that our delivery method works, and that

believe there is a meaningful role for our technology

Another area Rhinomed is pursuing with its nasal

it solves clear unmet patient and clinician needs, we

device technology is the delivery of drugs for migraines

believe we have a very attractive proposition to the current players in this market.”

The clinical trial program on patients with

and allergies. The first cab off the rank as a proof-of-

sleep apnoea will commence in early 2015 to assess

how the technology could be used as a stand-alone

The potential applications and the range of drugs that could be delivered using this type of delivery method are significant, from acute rhinitis drugs through to

therapy and as a companion therapy; for example, as

“I was acutely aware of the value of novel delivery

a conjunct therapy which could improve the efficacy

methods through my work with Melbourne-based

of a dental plate.

“In settings where getting a drug into someone

looked at the challenges facing existing nasal sprays, of

quickly and where either oral or even injection delivery

collapse of the palate,” said Johnson, “so while they

particular interest was the observation that the sprays

is problematic, the nose is a great site,” said Johnson.

physically stop the jaw from collapsing the throat,

often fall out - either through the nostrils or down

Another market with potential for the device is

we believe our device can assist with airflow into the

the back of the throat. So we developed the concept

with people suffering from dysphagia. The number of

of delivering drugs and keeping them in situ through

people who have difficulty swallowing is growing - in

large part due to the ageing population - so giving

“Most sleep apnoea patients report poor sleep quality. We are hopeful that our technology will not

The nose as a site to deliver drugs is very effective.

only be able to deliver some meaningful clinical end

It is safe, uptake is highly efficient and delivery into

points but also improve a patient’s all-important, but

the blood is relatively direct - unlike taking a pill that

often neglected, sleep quality. If we can deliver this, we

can be inefficiently absorbed through the gut wall.

will have a significant impact on the level of adherence and compliance within this market.”

Nasal drug delivery also enables the dose of a medicine to be adjusted relatively quickly. The

drugs via the nose instead of in tablet form provides a good option for these people. Assuming positive outcomes from the trial program, the company plans to partner with a bigger company to take the drug-delivery program through to commercialisation.