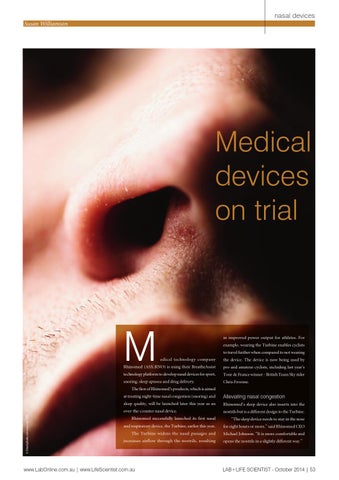 in improved power output for athletes. For example, wearing the Turbine enables cyclists to travel further when compared to not wearing edical technology company

the device. The device is now being used by

The first of Rhinomed’s products, which is aimed at treating night-time nasal congestion (snoring) and

sleep quality, will be launched later this year as an

nostrils but is a different design to the Turbine.

“The sleep device needs to stay in the nose

and respiratory device, the Turbine, earlier this year.

The Turbine widens the nasal passages and

Michael Johnson. “It is more comfortable and

increases airflow through the nostrils, resulting

opens the nostrils in a slightly different way.”