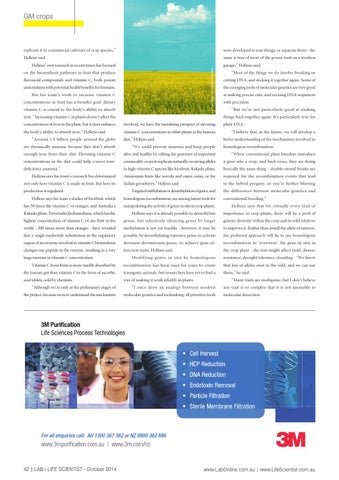 replicate it in commercial cultivars of crop species,”

were developed to join things, or separate them - the

same is true of most of the power tools in a modern garage,” Hellens said. © freeimages.com/profile/tvvoodoo

Hellens’ own research in recent times has focused on the biosynthesis pathways in fruit that produce flavonoid compounds and vitamin C, both potent antioxidants with potential health benefits for humans. But his team’s work to increase vitamin C concentrations in fruit has a broader goal: dietary vitamin C is crucial to the body’s ability to absorb

the emerging tools of molecular genetics are very good at making precise cuts, and excising DNA sequences with precision. “But we’re not particularly good at sticking things back together again. It’s particularly true for

iron. “Increasing vitamin C in plants doesn’t affect the concentration of iron in the plant, but it does enhance

involved, we have the tantalising prospect of elevating

vitamin C concentrations in other plants in the human

“Around 1.6 billion people around the globe

“Most of the things we do involve breaking or cutting DNA, and sticking it together again. Some of

plant DNA. “I believe that, in the future, we will develop a better understanding of the mechanisms involved in

are chronically anaemic because they don’t absorb

“We could prevent anaemia and keep people

alive and healthy by editing the genomes of important

concentrations in the diet could help correct iron-

a gene into a crop, and back-cross, they are doing

Amazonian fruits like acerola and camu camu, or the

required for the recombination events that lead

to the hybrid progeny, so you’re further blurring

Hellens says his team’s research has determined not only how vitamin C is made in fruit, but how its production is regulated.

the differences between molecular genetics and

Hellens says his team’s studies of kiwifruit, which

homologous recombination, are among future tools for

has 50 times the vitamin C of oranges, and Australia’s

manipulating the activity of genes in situ in crop plants.

Hellens says that for virtually every trait of

Kakadu plum, Terminalia ferdinandiana, which has the

Hellens says it is already possible to demethylate

importance in crop plants, there will be a pool of

highest concentration of vitamin C of any fruit in the

genetic diversity within the crop and its wild relatives

methylation is not yet feasible - however, it may be

to improve it. Rather than install the allele of interest,

that a single nucleotide substitution in the regulatory

the preferred approach will be to use homologous

region of an enzyme involved in vitamin C biosynthesis

recombination to ‘overwrite’ the gene in situ in

changes one peptide in the enzyme, resulting in a very

the crop plant - the trait might affect yield, disease

Modifying genes in situ by homologous

Vitamin C from fruits is more readily absorbed by

recombination has been used for years to create

that lots of alleles exist in the wild, and we can use

the human gut than vitamin C in the form of ascorbic

transgenic animals, but researchers have yet to find a

way of making it work reliably in plants.

“Many traits are multigenic, but I don’t believe

“Although we’re only at the preliminary stages of

“I once drew an analogy between modern

the project, because we now understand the mechanism

any trait is so complex that it is not amenable to molecular dissection.