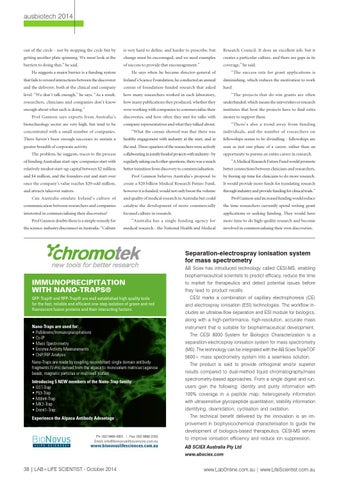 out of the circle - not by stopping the cycle but by

is very hard to define, and harder to prescribe, but

Research Council. It does an excellent job, but it

getting another plate spinning. We must look at the

change must be encouraged, and we need examples

creates a particular culture, and there are gaps in its

barriers to doing that,” he said.

of success to provide that encouragement.”

He suggests a major barrier is a funding system

He says when he became director-general of

“The success rate for grant applications is

that fails to reward interactions between the discoverer

diminishing, which reduces the motivation to work

and the deliverer, both at the clinical and company

census of foundation-funded research that asked

how many researchers worked in each laboratory,

“The projects that do win grants are often

how many publications they produced, whether they

underfunded, which means the universities or research

enough about what each is doing.”

were working with companies to commercialise their

institutes that host the projects have to find extra

discoveries, and how often they met for talks with

money to support them.

biotechnology sector are very high, but tend to be

company representatives and what they talked about.

“There’s also a trend away from funding

concentrated with a small number of companies.

“What the census showed was that there was

individuals, and the number of researchers on

There haven’t been enough successes to sustain a

healthy engagement with industry at the start, and at

the end. Three-quarters of the researchers were actively

seen as just one phase of a career, rather than an opportunity to pursue an entire career in research.

The problem, he suggests, traces to the process

collaborating in jointly funded projects with industry - by

regularly asking each other questions, there was a much

better transition from discovery to commercialisation.

better connections between clinicians and researchers,

and $4 million, and the founders exit and start over

by freeing up time for clinicians to do more research.

It would provide more funds for translating research

however it is funded, would not only boost the volume

through industry and provide funding for clinical trials.”

Can Australia emulate Ireland’s culture of

and quality of medical research in Australia but could

communication between researchers and companies

catalyse the development of more commercially

applications or seeking funding. They would have

Prof Gannon doubts there is a simple remedy for

“Australia has a single funding agency for

the science-industry disconnect in Australia: “Culture

more time to do high-quality research and become involved in commercialising their own discoveries.

IMMUNOPRECIPITATION WITH NANO-TRAPS® GFP-Trap® and RFP-Trap® are well established high quality tools for the fast, reliable and efficient one-step isolation of green and red fluorescent fusion proteins and their interacting factors.

biopharmaceutical scientists to predict efficacy, reduce the time to market for therapeutics and detect potential issues before they lead to product recalls. CESI marks a combination of capillary electrophoresis (CE) and electrospray ionisation (ESI) technologies. The workflow includes an ultralow-flow separation and ESI module for biologics, along with a high-performance, high-resolution, accurate mass

instrument that is suitable for biopharmaceutical development. The CESI 8000 System for Biologics Characterization is a separation-electrospray ionisation system for mass spectrometry (MS). The technology can be integrated with the AB Sciex TripleTOF

5600+ mass spectrometry system into a seamless solution. The product is said to provide orthogonal and/or superior results compared to dual-method liquid chromatography/mass spectrometry-based approaches. From a single digest and run, users gain the following: identity and purity information with 100% coverage in a peptide map; heterogeneity information with ultrasensitive glycopeptide quantitation; stability information identifying, deamidation, cyclisation and oxidation. The technical benefit delivered by the innovation is an improvement in biophysicochemical characterisation to guide the development of biologics-based therapeutics. CESI-MS serves