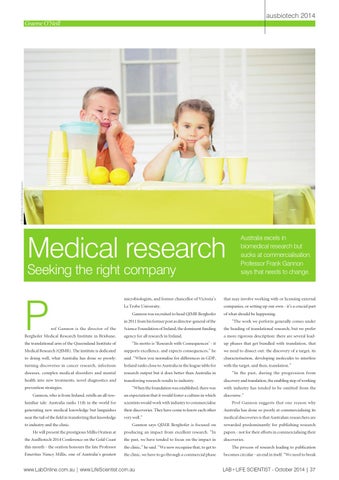 microbiologists, and former chancellor of Victoria’s

that may involve working with or licensing external

companies, or setting up our own - it’s a crucial part

of what should be happening.

in 2011 from his former post as director-general of the

“The work we perform generally comes under

the heading of translational research, but we prefer

agency for all research in Ireland.

a more rigorous description: there are several lead-

the translational arm of the Queensland Institute of

“Its motto is ‘Research with Consequences’ - it

up phases that get bundled with translation, that

supports excellence, and expects consequences,” he

we need to dissect out: the discovery of a target, its

to doing well, what Australia has done so poorly:

said. “When you normalise for differences in GDP,

Ireland ranks close to Australia in the league table for

with the target, and then, translation.”

research output but it does better than Australia in

“When the foundation was established, there was

“In the past, during the progression from discovery and translation, the enabling step of working with industry has tended to be omitted from the

Gannon, who is from Ireland, retells an all-too-

an expectation that it would foster a culture in which

familiar tale: Australia ranks 11th in the world for

scientists would work with industry to commercialise

Prof Gannon suggests that one reason why

their discoveries. They have come to know each other

Australia has done so poorly at commercialising its

near the tail of the field in transferring that knowledge

medical discoveries is that Australian researchers are

to industry and the clinic.

He will present the prestigious Millis Oration at

producing an impact from excellent research. “In

papers - not for their efforts in commercialising their

the AusBiotech 2014 Conference on the Gold Coast

the past, we have tended to focus on the impact in

this month - the oration honours the late Professor

the clinic,” he said. “We now recognise that, to get to

The process of research leading to publication

the clinic, we have to go through a commercial phase

becomes circular - an end in itself. “We need to break