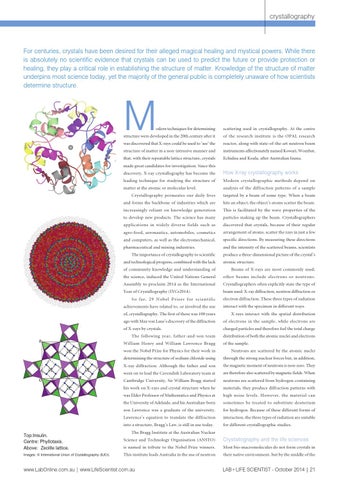 For centuries, crystals have been desired for their alleged magical healing and mystical powers. While there is absolutely no scientific evidence that crystals can be used to predict the future or provide protection or healing, they play a critical role in establishing the structure of matter. Knowledge of the structure of matter underpins most science today, yet the majority of the general public is completely unaware of how scientists determine structure.

scattering used in crystallography. At the centre

structure were developed in the 20th century after it

of the research institute is the OPAL research

was discovered that X-rays could be used to ‘see’ the

reactor, along with state-of-the-art neutron beam

structure of matter in a non-intrusive manner and

that, with their repeatable lattice structure, crystals

Echidna and Koala, after Australian fauna.

made great candidates for investigation. Since this discovery, X-ray crystallography has become the

leading technique for studying the structure of

Modern crystallographic methods depend on

matter at the atomic or molecular level.

analysis of the diffraction patterns of a sample

targeted by a beam of some type. When a beam

and forms the backbone of industries which are

hits an object, the object’s atoms scatter the beam.

This is facilitated by the wave properties of the

to develop new products. The science has many

particles making up the beam. Crystallographers

applications in widely diverse fields such as

discovered that crystals, because of their regular

arrangement of atoms, scatter the rays in just a few

and computers, as well as the electromechanical,

specific directions. By measuring these directions

and the intensity of the scattered beams, scientists

The importance of crystallography to scientific and technological progress, combined with the lack

Beams of X-rays are most commonly used;

other beams include electrons or neutrons.

Assembly to proclaim 2014 as the International

achievements have related to, or involved the use

electron diffraction. These three types of radiation interact with the specimen in different ways.

of, crystallography. The first of these was 100 years

X-rays interact with the spatial distribution

ago with Max von Laue’s discovery of the diffraction

of X-rays by crystals.

of community knowledge and understanding of

So far, 29 Nobel Prizes for scientific

produce a three-dimensional picture of the crystal’s

distribution of both the atomic nuclei and electrons of the sample.

won the Nobel Prize for Physics for their work in

Neutrons are scattered by the atomic nuclei

through the strong nuclear forces but, in addition,

X-ray diffraction. Although the father and son

the magnetic moment of neutrons is non-zero. They

went on to lead the Cavendish Laboratory team at

are therefore also scattered by magnetic fields. When

neutrons are scattered from hydrogen-containing

his work on X-rays and crystal structure when he

materials, they produce diffraction patterns with

was Elder Professor of Mathematics and Physics at

high noise levels. However, the material can

the University of Adelaide, and his Australian-born

sometimes be treated to substitute deuterium

son Lawrence was a graduate of the university.

for hydrogen. Because of these different forms of

Lawrence’s equation to translate the diffraction

interaction, the three types of radiation are suitable

into a structure, Bragg’s Law, is still in use today.

Crystallography and the life sciences

is named in tribute to the Nobel Prize winners.

Most bio-macromolecules do not form crystals in

This institute leads Australia in the use of neutron

their native environment, but by the middle of the