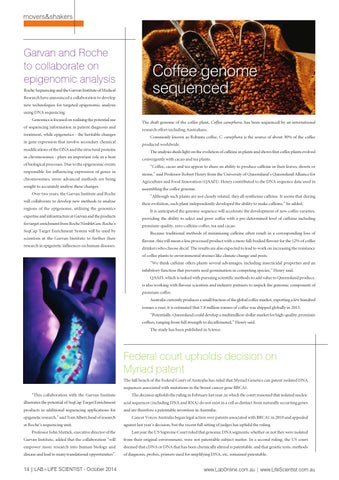 new technologies for targeted epigenomic analysis using DNA sequencing. Genomics is focused on realising the potential use of sequencing information in patient diagnosis and treatment, while epigenetics - the heritable changes in gene expression that involve secondary chemical modifications of the DNA and the structural proteins in chromosomes - plays an important role in a host of biological processes. Due to the epigenomic events responsible for influencing expression of genes in chromosomes, more advanced methods are being sought to accurately analyse these changes. Over two years, the Garvan Institute and Roche will collaborate to develop new methods to analyse regions of the epigenome, utilising the genomics expertise and infrastructure at Garvan and the products for target enrichment from Roche NimbleGen. Roche’s SeqCap Target Enrichment System will be used by scientists at the Garvan Institute to further their research in epigenetic influences on human diseases.

The draft genome of the coffee plant, Coffea canephora, has been sequenced by an international research effort including Australians. Commonly known as Robusta coffee, C. canephora is the source of about 30% of the coffee produced worldwide. The analysis sheds light on the evolution of caffeine in plants and shows that coffee plants evolved convergently with cacao and tea plants. “Coffee, cacao and tea appear to share an ability to produce caffeine in their leaves, shoots or stems,” said Professor Robert Henry from the University of Queensland’s Queensland Alliance for Agriculture and Food Innovation (QAAFI). Henry contributed to the DNA sequence data used in assembling the coffee genome. “Although such plants are not closely related, they all synthesise caffeine. It seems that during their evolution, each plant independently developed the ability to make caffeine,” he added. It is anticipated the genome sequence will accelerate the development of new coffee varieties, providing the ability to select and grow coffee with a pre-determined level of caffeine including premium-quality, zero-caffeine coffee, tea and cacao. Because traditional methods of minimising caffeine often result in a corresponding loss of flavour, this will mean a less processed product with a more full-bodied flavour for the 12% of coffee drinkers who choose decaf. The results are also expected to lead to work on increasing the resistance of coffee plants to environmental stresses like climate change and pests. “We think caffeine offers plants several advantages, including insecticidal properties and an inhibitory function that prevents seed germination in competing species,” Henry said. QAAFI, which is tasked with pursuing scientific methods to add value to Queensland produce, is also working with flavour scientists and industry partners to unpick the genomic component of premium coffee. Australia currently produces a small fraction of the global coffee market, exporting a few hundred tonnes a year; it is estimated that 7.8 million tonnes of coffee was shipped globally in 2013. “Potentially, Queensland could develop a multimillion-dollar market for high-quality, premium coffees, ranging from full strength to decaffeinated,” Henry said. The study has been published in Science.

Federal court upholds decision on Myriad patent The full bench of the Federal Court of Australia has ruled that Myriad Genetics can patent isolated DNA sequences associated with mutations in the breast cancer gene BRCA1. “This collaboration with the Garvan Institute

The decision upholds the ruling in February last year, in which the court reasoned that isolated nucleic

products in additional sequencing applications for

and are therefore a patentable invention in Australia.

Cancer Voices Australia began legal action over patents associated with BRCA1 in 2010 and appealed against last year’s decision, but the recent full sitting of judges has upheld the ruling.

Last year the US Supreme Court ruled that genomic DNA segments, whether or not they were isolated

Garvan Institute, added that the collaboration “will

from their original environment, were not patentable subject matter. In a second ruling, the US court

deemed that cDNA or DNA that has been chemically altered is patentable, and that genetic tests, methods

disease and lead to many translational opportunities”.