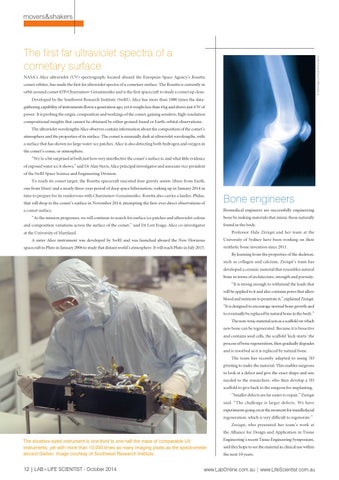 The first far ultraviolet spectra of a cometary surface NASA’s Alice ultraviolet (UV) spectrograph, located aboard the European Space Agency’s Rosetta comet orbiter, has made the first far ultraviolet spectra of a cometary surface. The Rosetta is currently in orbit around comet 67P/Churyumov-Gerasimenko and is the first spacecraft to study a comet up close. Developed by the Southwest Research Institute (SwRI), Alice has more than 1000 times the datagathering capability of instruments flown a generation ago, yet it weighs less than 4 kg and draws just 4 W of power. It is probing the origin, composition and workings of the comet, gaining sensitive, high-resolution compositional insights that cannot be obtained by either ground-based or Earth-orbital observations. The ultraviolet wavelengths Alice observes contain information about the composition of the comet’s atmosphere and the properties of its surface. The comet is unusually dark at ultraviolet wavelengths, with a surface that has shown no large water-ice patches. Alice is also detecting both hydrogen and oxygen in the comet’s coma, or atmosphere. “We’re a bit surprised at both just how very unreflective the comet’s surface is, and what little evidence of exposed water ice it shows,” said Dr Alan Stern, Alice principal investigator and associate vice president of the SwRI Space Science and Engineering Division. To reach its comet target, the Rosetta spacecraft executed four gravity assists (three from Earth, one from Mars) and a nearly three-year period of deep space hibernation, waking up in January 2014 in that will drop to the comet’s surface in November 2014, attempting the first-ever direct observations of

time to prepare for its rendezvous with Churyumov-Gerasimenko. Rosetta also carries a lander, Philae,

“As the mission progresses, we will continue to search for surface ice patches and ultraviolet colour and composition variations across the surface of the comet,” said Dr Lori Feaga, Alice co-investigator

bone by making materials that mimic those naturally found in the body. Professor Hala Zreiqat and her team at the

at the University of Maryland. A sister Alice instrument was developed by SwRI and was launched aboard the New Horizons spacecraft to Pluto in January 2006 to study that distant world’s atmosphere. It will reach Pluto in July 2015.

University of Sydney have been working on their synthetic bone invention since 2011. By learning from the properties of the skeleton, such as collagen and calcium, Zreiqat’s team has developed a ceramic material that resembles natural bone in terms of architecture, strength and porosity. “It is strong enough to withstand the loads that will be applied to it and also contains pores that allow blood and nutrients to penetrate it,” explained Zreiqat. “It is designed to encourage normal bone growth and to eventually be replaced by natural bone in the body.” The non-toxic material acts as a scaffold on which new bone can be regenerated. Because it is bioactive and contains seed cells, the scaffold ‘kick-starts’ the process of bone regeneration, then gradually degrades and is resorbed as it is replaced by natural bone. The team has recently adapted to using 3D printing to make the material. This enables surgeons to look at a defect and give the exact shape and size needed to the researchers, who then develop a 3D scaffold to give back to the surgeon for implanting. “Smaller defects are far easier to repair,” Zreiqat said. “The challenge is larger defects. We have experiments going on at the moment for maxillofacial regeneration, which is very difficult to regenerate.” Zreiqat, who presented her team’s work at the Alliance for Design and Application in Tissue

The shoebox-sized instrument is one-third to one-half the mass of comparable UV instruments, yet with more than 10,000 times as many imaging pixels as the spectrometer aboard Galileo. Image courtesy of Southwest Research Institute.

Engineering’s recent Tissue Engineering Symposium, said they hope to see the material in clinical use within the next 10 years.