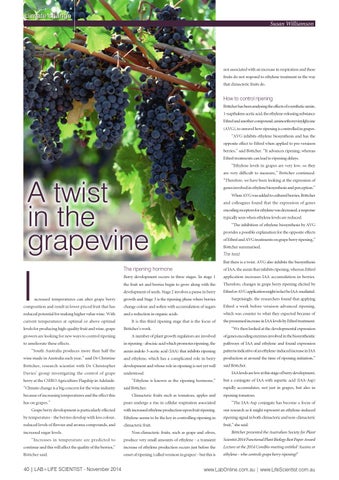 not associated with an increase in respiration and these fruits do not respond to ethylene treatment in the way that climacteric fruits do.

How to control ripening Böttcher has been analysing the effects of a synthetic auxin, 1-napthalene acetic acid, the ethylene-releasing substance Ethrel and another compound, aminoethoxyvinylglycine (AVG), to unravel how ripening is controlled in grapes. “AVG inhibits ethylene biosynthesis and has the opposite effect to Ethrel when applied to pre-veraison berries,” said Böttcher. “It advances ripening, whereas Ethrel treatments can lead to ripening delays. “Ethylene levels in grapes are very low, so they are very difficult to measure,” Böttcher continued.

A twist in the grapevine

“Therefore, we have been looking at the expression of genes involved in ethylene biosynthesis and perception.” When AVG was added to cultured berries, Böttcher and colleagues found that the expression of genes encoding receptors for ethylene was decreased, a response typically seen when ethylene levels are reduced. “The inhibition of ethylene biosynthesis by AVG provides a possible explanation for the opposite effects of Ethrel and AVG treatments on grape berry ripening,” Böttcher summarised. The twist But there is a twist. AVG also inhibits the biosynthesis

of IAA, the auxin that inhibits ripening, whereas Ethrel

the fruit set and berries begin to grow along with the

development of seeds. Stage 2 involves a pause in berry

Ethrel or AVG application might in fact be IAA-mediated.

growth and Stage 3 is the ripening phase where berries

Surprisingly, the researchers found that applying

composition and result in lower priced fruit that has

change colour and soften with accumulation of sugars

and a reduction in organic acids.

which was counter to what they expected because of

current temperatures at optimal or above optimal levels for producing high-quality fruit and wine, grape

It is this third ripening stage that is the focus of

the presumed increase in IAA levels by Ethrel treatment. “We then looked at the developmental expression

Böttcher’s work. A number of plant growth regulators are involved

of genes encoding enzymes involved in the biosynthesitic

in ripening - abscisic acid which promotes ripening, the

pathways of IAA and ethylene and found expression

“South Australia produces more than half the

patterns indicative of an ethylene-induced increase in IAA

wine made in Australia each year,” said Dr Christine

and ethylene, which has a complicated role in berry

production at around the time of ripening initiation,”

development and whose role in ripening is not yet well

growers are looking for new ways to control ripening to ameliorate these effects.

berry at the CSIRO Agriculture Flagship in Adelaide. “Climate change is a big concern for the wine industry because of increasing temperatures and the effect this

IAA levels are low at this stage of berry development,

“Ethylene is known as the ripening hormone,”

but a conjugate of IAA with aspartic acid (IAA-Asp) rapidly accumulates, not just in grapes, but also in

said Böttcher. Climacteric fruits such as tomatoes, apples and

“The IAA-Asp conjugate has become a focus of

by temperature - the berries develop with less colour,

Ethylene seems to be the key in controlling ripening in

ripening signal in both climacteric and non-climacteric

reduced levels of flavour and aroma compounds, and

Non-climacteric fruits, such as grape and olives,

“Increases in temperature are predicted to

continue and this will affect the quality of the berries,”

increase of ethylene production occurs just before the

Lecture at the 2014 ComBio meeting entitled ‘Auxins or

onset of ripening (called veraison in grapes) - but this is