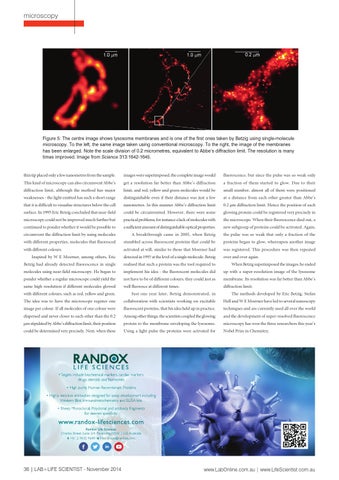 Figure 5: The centre image shows lysosome membranes and is one of the first ones taken by Betzig using single-molecule microscopy. To the left, the same image taken using conventional microscopy. To the right, the image of the membranes has been enlarged. Note the scale division of 0.2 micrometres, equivalent to Abbe’s diffraction limit. The resolution is many times improved. Image from Science 313:1642-1645.

thin tip placed only a few nanometres from the sample.

images were superimposed, the complete image would

fluorescence, but since the pulse was so weak only

This kind of microscopy can also circumvent Abbe’s

get a resolution far better than Abbe’s diffraction

a fraction of them started to glow. Due to their

diffraction limit, although the method has major

limit, and red, yellow and green molecules would be

small number, almost all of them were positioned

weaknesses - the light emitted has such a short range

distinguishable even if their distance was just a few

at a distance from each other greater than Abbe’s

that it is difficult to visualise structures below the cell

0.2 µm diffraction limit. Hence the position of each

could be circumvented. However, there were some

glowing protein could be registered very precisely in

microscopy could not be improved much further but

practical problems, for instance a lack of molecules with

the microscope. When their fluorescence died out, a

continued to ponder whether it would be possible to

new subgroup of proteins could be activated. Again,

A breakthrough came in 2005, when Betzig

the pulse was so weak that only a fraction of the

with different properties, molecules that fluoresced

stumbled across fluorescent proteins that could be

activated at will, similar to those that Moerner had

was registered. This procedure was then repeated

Inspired by W E Moerner, among others, Eric

detected in 1997 at the level of a single molecule. Betzig

over and over again.

realised that such a protein was the tool required to

When Betzig superimposed the images, he ended

implement his idea - the fluorescent molecules did

up with a super-resolution image of the lysosome

ponder whether a regular microscope could yield the

not have to be of different colours, they could just as

membrane. Its resolution was far better than Abbe’s

with different colours, such as red, yellow and green.

The idea was to have the microscope register one

collaboration with scientists working on excitable

Hell and W E Moerner have led to several nanoscopy

image per colour. If all molecules of one colour were

fluorescent proteins, that his idea held up in practice.

techniques and are currently used all over the world

dispersed and never closer to each other than the 0.2

Among other things, the scientists coupled the glowing

and the development of super-resolved fluorescence

protein to the membrane enveloping the lysosome.

microscopy has won the three researchers this year’s

could be determined very precisely. Next, when these

Using a light pulse the proteins were activated for