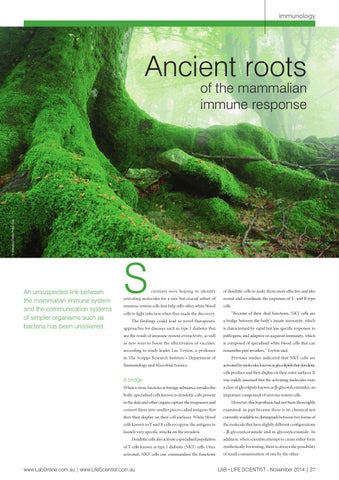 of the mammalian immune response

An unsuspected link between the mammalian immune system and the communication systems of simpler organisms such as bacteria has been uncovered.

cientists were hoping to identify

of dendritic cells to make them more effective and also

activating molecules for a rare but crucial subset of

recruit and coordinate the responses of T- and B-type

cells to fight infection when they made the discovery.

“Because of their dual functions, NKT cells are

The findings could lead to novel therapeutic

a bridge between the body’s innate immunity, which

approaches for diseases such as type 1 diabetes that

is characterised by rapid but less specific responses to

are the result of immune system overactivity, as well

pathogens, and adaptive or acquired immunity, which

as new ways to boost the effectiveness of vaccines,

is composed of specialised white blood cells that can

according to study leader Luc Teyton, a professor

in The Scripps Research Institute’s Department of Immunology and Microbial Science.

Previous studies indicated that NKT cells are activated by molecules known as glycolipids that dendritic cells produce and then display on their outer surfaces. It

was widely assumed that the activating molecules were

When a virus, bacteria or foreign substance invades the

a class of glycolipids known as β-glycosylceramides, an

in the skin and other organs capture the trespassers and

However, this hypothesis had not been thoroughly

convert them into smaller pieces called antigens that

examined, in part because there is no chemical test

they then display on their cell surfaces. White blood

currently available to distinguish between two forms of

cells known as T and B cells recognise the antigens to

the molecule that have slightly different configurations

addition, when scientists attempt to create either form

of T cells known as type 1 diabetes (NKT) cells. Once

synthetically for testing, there is always the possibility

of small contamination of one by the other.