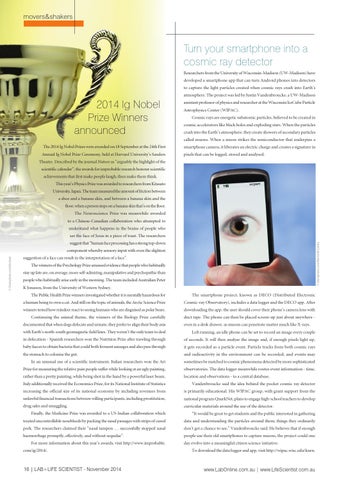 atmosphere. The project was led by Justin Vandenbroucke, a UW-Madison assistant professor of physics and researcher at the Wisconsin IceCube Particle Astrophysics Center (WIPAC). Cosmic rays are energetic subatomic particles, believed to be created in cosmic accelerators like black holes and exploding stars. When the particles crash into the Earth’s atmosphere, they create showers of secondary particles called muons. When a muon strikes the semiconductor that underpins a

smartphone camera, it liberates an electric charge and creates a signature in

Theatre. Described by the journal Nature as “arguably the highlight of the scientific calendar”, the awards for improbable research honour scientific achievements that first make people laugh, then make them think. This year’s Physics Prize was awarded to researchers from Kitasato University, Japan. The team measured the amount of friction between a shoe and a banana skin, and between a banana skin and the floor, when a person steps on a banana skin that’s on the floor. The Neuroscience Prize was meanwhile awarded to a Chinese-Canadian collaboration who attempted to understand what happens in the brains of people who see the face of Jesus in a piece of toast. The researchers © iStockphoto.com/Martin McCarthy

suggest that “human face processing has a strong top-down © iStockphoto.com/blackred

component whereby sensory input with even the slightest suggestion of a face can result in the interpretation of a face”. The winners of the Psychology Prize amassed evidence that people who habitually stay up late are, on average, more self-admiring, manipulative and psychopathic than people who habitually arise early in the morning. The team included Australian Peter K Jonason, from the University of Western Sydney. The Public Health Prize winners investigated whether it is mentally hazardous for

a human being to own a cat. And still on the topic of animals, the Arctic Science Prize

Cosmic-ray Observatory), includes a data logger and the DECO app. After

winners tested how reindeer react to seeing humans who are disguised as polar bears.

downloading the app, the user should cover their phone’s camera lens with

Continuing the animal theme, the winners of the Biology Prize carefully

duct tape. The phone can then be placed screen-up just about anywhere -

documented that when dogs defecate and urinate, they prefer to align their body axis

even in a desk drawer, as muons can penetrate matter much like X-rays.

with Earth’s north-south geomagnetic field lines. They weren’t the only team to deal

Left running, an idle phone can be set to record an image every couple

in defecation - Spanish researchers won the Nutrition Prize after trawling through

of seconds. It will then analyse the image and, if enough pixels light up,

it gets recorded as a particle event. Particle tracks from both cosmic rays

the stomach to colonise the gut.

and radioactivity in the environment can be recorded, and events may

In an unusual use of a scientific instrument, Italian researchers won the Art

sometimes be matched to cosmic phenomena detected by more sophisticated

Prize for measuring the relative pain people suffer while looking at an ugly painting,

rather than a pretty painting, while being shot in the hand by a powerful laser beam.

location and observations - to a central database.

Italy additionally received the Economics Prize, for its National Institute of Statistics

Vandenbroucke said the idea behind the pocket cosmic ray detector

is primarily educational. His WIPAC group, with grant support from the

curricular materials around the use of the detector.

Finally, the Medicine Prize was awarded to a US-Indian collaboration which

data and understanding the particles around them; things they ordinarily

don’t get a chance to see,” Vandenbroucke said. He believes that if enough

haemorrhage promptly, effectively, and without sequelae”.

people use their old smartphones to capture muons, the project could one

For more information about this year’s awards, visit http://www.improbable. com/ig/2014/.