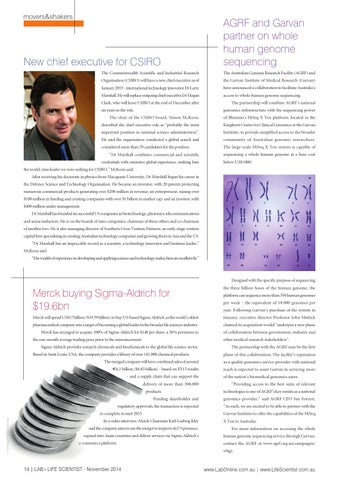 The Commonwealth Scientific and Industrial Research

Organisation (CSIRO) will have a new chief executive as of

have announced a collaboration to facilitate Australia’s

Clark, who will leave CSIRO at the end of December after

six years in the role. The chair of the CSIRO board, Simon McKeon,

of Illumina’s HiSeq X Ten platform, located in the

described the chief executive role as “probably the most

Kinghorn Centre for Clinical Genomics at the Garvan

He said the organisation conducted a global search and

considered more than 70 candidates for the position.

The large-scale HiSeq X Ten system is capable of

sequencing a whole human genome at a base cost below US$1000.

the world-class leader we were seeking for CSIRO,” McKeon said. After receiving his doctorate in physics from Macquarie University, Dr Marshall began his career in the Defence Science and Technology Organisation. He became an inventor, with 20 patents protecting numerous commercial products generating over $200 million in revenue; an entrepreneur, raising over $100 million in funding and creating companies with over $1 billion in market cap; and an investor, with $400 million under management. Dr Marshall has founded six successful US companies in biotechnology, photonics, telecommunications and semiconductors. He is on the boards of nine companies, chairman of three others and co-chairman of another two. He is also managing director of Southern Cross Venture Partners, an early-stage venture capital firm specialising in creating Australian technology companies and growing them in Asia and the US. “Dr Marshall has an impeccable record as a scientist, a technology innovator and business leader,” McKeon said. “His wealth of experience in developing and applying science and technology makes him an excellent fit.”

Designed with the specific purpose of sequencing

the three billion bases of the human genome, the

pharmaceutical company sets a target of becoming a global leader in the broader life sciences industry.

claimed its acquisition would “underpin a new phase

of collaboration between government, industry and

the one-month average trading price prior to the announcement.

per week - the equivalent of 18,000 genomes per year. Following Garvan’s purchase of the system in

Sigma-Aldrich provides research chemicals and biochemicals to the global life science sector. Based in Saint Louis, USA, the company provides a library of over 147,000 chemical products.

The partnership with the AGRF may be the first phase of this collaboration. The facility’s reputation

The merged company will have combined sales of around

as a quality genomics service provider with national

reach is expected to assist Garvan in servicing more

- and a supply chain that can support the delivery of more than 300,000 products.

of the nation’s biomedical genomics users. “Providing access to the best suite of relevant technologies is one of AGRF’s key remits as a national

regulatory approvals, the transaction is expected

“As such, we are excited to be able to partner with the

to complete in mid-2015. © freeimages.com/profile/nkzs

Garvan Institute to offer the capabilities of the HiSeq X Ten to Australia.

said the company aims to use the merger to improve its US presence,

For more information on accessing the whole

expand into Asian countries and deliver services via Sigma-Aldrich’s