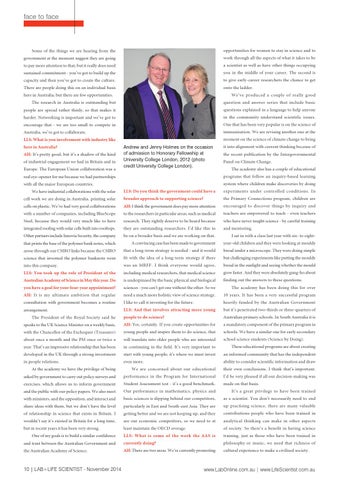 Some of the things we are hearing from the

opportunities for women to stay in science and to

government at the moment suggest they are going

work through all the aspects of what it takes to be

to pay more attention to that, but it really does need

a scientist as well as have other things occupying

sustained commitment - you’ve got to build up the

you in the middle of your career. The second is

capacity and then you’ve got to create the culture.

to give early-career researchers the chance to get

There are people doing this on an individual basis

onto the ladder. We’ve produced a couple of really good

here in Australia, but there are few opportunities. The research in Australia is outstanding but

question and answer series that include basic

people are spread rather thinly, so that makes it

questions explained in a language to help anyone

harder. Networking is important and we’ve got to

in the community understand scientific issues.

encourage that - we are too small to compete in

One that has been very popular is on the science of

Australia, we’ve got to collaborate.

immunisation. We are revising another one at the

moment on the science of climate change to bring

here in Australia? AH: It’s pretty good, but it’s a shadow of the kind of industrial engagement we had in Britain and in Europe. The European Union collaboration was a

it into alignment with current thinking because of the recent publication by the Intergovernmental Panel on Climate Change. The academy also has a couple of educational programs that follow an inquiry-based learning

real eye-opener for me because we had partnerships

with all the major European countries. LLS: Do you think the government could have a

experiments under controlled conditions. In

cell work we are doing in Australia, printing solar

the Primary Connections program, children are

AH: I think the government does pay more attention

encouraged to discover things by inquiry and

with a number of companies, including BlueScope

to the researchers in particular areas, such as medical

teachers are empowered to teach - even teachers

Steel, because they would very much like to have

research. They rightly deserve to be heard because

who have never taught science - by careful training

Other partners include Innovia Security, the company

be on a broader basis and we are working on that.

that prints the base of the polymer bank notes, which

A convincing case has been made to government

year-old children and they were looking at mouldy

arose through our CSIRO links because the CSIRO

that a long-term strategy is needed - and it would

bread under a microscope. They were doing simple

fit with the idea of a long-term strategy if there

was an MRFF. I think everyone would agree,

bread in the sunlight and seeing whether the mould

LLS: You took up the role of President of the

including medical researchers, that medical science

grew faster. And they were absolutely gung-ho about

Australian Academy of Science in May this year. Do

is underpinned by the basic physical and biological

finding out the answers to these questions.

you have a goal for your four-year appointment?

sciences - you can’t get one without the other. So we

The academy has been doing this for over

AH: It is my ultimate ambition that regular

need a much more holistic view of science strategy.

10 years. It has been a very successful program

consultation with government becomes a routine

I like to call it investing for the future.

heavily funded by the Australian Government

but it’s penetrated two-thirds or three-quarters of

people to do science?

Australian primary schools. In South Australia it is

speaks to the UK Science Minister on a weekly basis,

AH: Yes, certainly. If you create opportunities for

a mandatory component of the primary program in

with the Chancellor of the Exchequer (Treasurer)

young people and inspire them to do science, that

schools. We have a similar one for early secondary

about once a month and the PM once or twice a

year. That’s an impressive relationship that has been

in continuing in the field. It’s very important to

These educational programs are about creating

developed in the UK through a strong investment

start with young people; it’s where we must invest

an informed community that has the independent

We have industrial collaborations with the solar

The President of the Royal Society said he

At the academy we have the privilege of being

We are concerned about our educational

their own conclusions. I think that’s important.

asked by government to carry out policy surveys and

performance in the Program for International

I’d be very pleased if all our decision-making was

exercises, which allows us to inform government

made on that basis.

and the public with our policy papers. We also meet

Our performance in mathematics, physics and

It’s a great privilege to have been trained

with ministers, and the opposition, and interact and

basic sciences is slipping behind our competitors,

as a scientist. You don’t necessarily need to end

share ideas with them, but we don’t have the level

particularly in East and South-east Asia. They are

up practising science, there are many valuable

of relationship in science that exists in Britain. I

getting better and we are not keeping up, and they

contributions people who have been trained in

wouldn’t say it’s existed in Britain for a long time,

are our economic competitors, so we need to at

analytical thinking can make in other aspects

but in recent years it has been very strong.

of society. So there’s a benefit in having science

LLS: What is some of the work the AAS is

training, just as those who have been trained in

and trust between the Australian Government and

philosophy or music, we need that richness of

the Australian Academy of Science.

One of my goals is to build a similar confidence