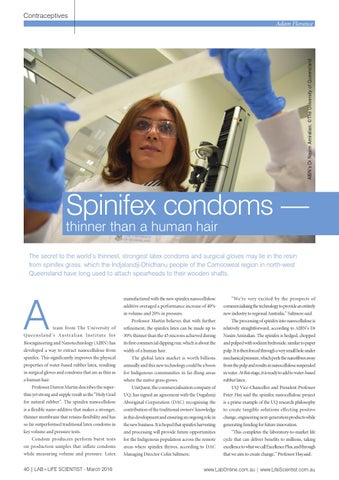 The secret to the world’s thinnest, strongest latex condoms and surgical gloves may lie in the resin from spinifex grass, which the Indjalandji-Dhidhanu people of the Camooweal region in north-west Queensland have long used to attach spearheads to their wooden shafts.

manufactured with the new spinifex nanocellulose

“We’re very excited by the prospects of

additive averaged a performance increase of 40%

commercialising the technology to provide an entirely

in volume and 20% in pressure.

Professor Martin believes that with further

The processing of spinifex into nanocellulose is

team from The University of

refinement, the spinifex latex can be made up to

relatively straightforward, according to AIBN’s Dr

30% thinner than the 45 microns achieved during

Bioengineering and Nanotechnology (AIBN) has

its first commercial dipping run, which is about the

and pulped with sodium hydroxide, similar to paper

developed a way to extract nanocellulose from

width of a human hair.

pulp. It is then forced through a very small hole under

spinifex. This significantly improves the physical

The global latex market is worth billions

mechanical pressure, which peels the nanofibres away

annually and this new technology could be a boon

from the pulp and results in nanocellulose suspended

in surgical gloves and condoms that are as thin as

for Indigenous communities in far-flung areas

in water. At this stage, it is ready to add to water-based

where the native grass grows.

UniQuest, the commercialisation company of

thin yet strong and supple result as the “Holy Grail

UQ, has signed an agreement with the Dugalunji

for natural rubber”. The spinifex nanocellulose

is a prime example of the UQ research philosophy

is a flexible nano-additive that makes a stronger,

contribution of the traditional owners’ knowledge

thinner membrane that retains flexibility and has

in this development and ensuring an ongoing role in

the new business. It is hoped that spinifex harvesting

and processing will provide future opportunities

“This completes the laboratory-to-market life

for the Indigenous population across the remote

cycle that can deliver benefits to millions, taking

on production samples that inflate condoms

areas where spinifex thrives, according to DAC

excellence to what we call Excellence Plus, and through

while measuring volume and pressure. Latex

that we aim to create change,” Professor Høj said.