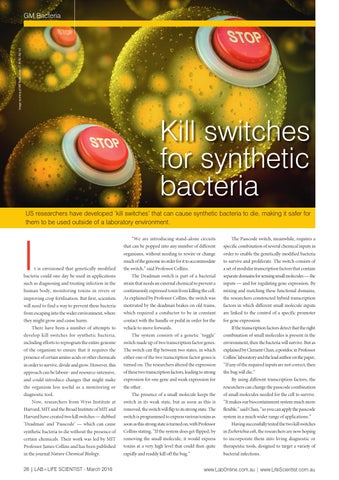 t is envisioned that genetically modified

“We are introducing stand-alone circuits

The Passcode switch, meanwhile, requires a

that can be popped into any number of different

organisms, without needing to rewire or change

much of the genome in order for it to accommodate

to survive and proliferate. The switch consists of

a set of modular transcription factors that contain

bacteria could one day be used in applications

The Deadman switch is part of a bacterial

such as diagnosing and treating infection in the

strain that needs an external chemical to prevent a

inputs — and for regulating gene expression. By

mixing and matching these functional domains,

As explained by Professor Collins, the switch was

will need to find a way to prevent these bacteria

motivated by the deadman brakes on old trains,

from escaping into the wider environment, where

which required a conductor to be in constant

are linked to the control of a specific promoter

contact with the handle or pedal in order for the

There have been a number of attempts to

If the transcription factors detect that the right

The system consists of a genetic ‘toggle’

combination of small molecules is present in the

including efforts to reprogram the entire genome

switch made up of two transcription factor genes.

environment, then the bacteria will survive. But as

of the organism to ensure that it requires the

The switch can flip between two states, in which

explained by Clement Chan, a postdoc in Professor

presence of certain amino acids or other chemicals

either one of the two transcription factor genes is

Collins’ laboratory and the lead author on the paper,

in order to survive, divide and grow. However, this

turned on. The researchers altered the expression

“If any of the required inputs are not correct, then

approach can be labour- and resource-intensive,

of these two transcription factors, leading to strong

the bug will die.”

the organism less useful as a monitoring or

By using different transcription factors, the researchers can change the passcode combination

The presence of a small molecule keeps the

of small molecules needed for the cell to survive.

Now, researchers from Wyss Institute at

switch in its weak state, but as soon as this is

“It makes our biocontainment system much more

Harvard, MIT and the Broad Institute of MIT and

removed, the switch will flip to its strong state. The

flexible,” said Chan, “so you can apply the passcode

switch is programmed to express various toxins as

system in a much wider range of applications.”

‘Deadman’ and ‘Passcode’ — which can cause

soon as this strong state is turned on, with Professor

synthetic bacteria to die without the presence of

Collins stating, “If the system does get flipped, by

in Escherichia coli, the researchers are now hoping

certain chemicals. Their work was led by MIT

removing the small molecule, it would express

to incorporate them into living diagnostic or

Professor James Collins and has been published

toxins at a very high level that could then quite

therapeutic tools, designed to target a variety of

in the journal Nature Chemical Biology.

rapidly and readily kill off the bug.”