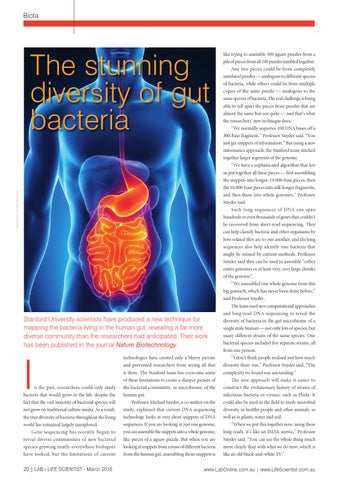 The stunning diversity of gut bacteria

like trying to assemble 100 jigsaw puzzles from a pile of pieces from all 100 puzzles jumbled together. Any two pieces could be from completely unrelated puzzles — analogous to different species of bacteria, while others could be from multiple copies of the same puzzle — analogous to the same species of bacteria. The real challenge is being able to tell apart the pieces from puzzles that are almost the same but not quite — and that’s what the researchers’ new technique does. “We normally sequence 100 DNA bases off a 300-base fragment,” Professor Snyder said. “You just get snippets of information.” But using a new informatics approach, the Stanford team stitched together larger segments of the genome. “We have a sophisticated algorithm that lets us put together all these pieces — first assembling the snippets into longer, 10,000-base pieces, then

the 10,000-base pieces into still-longer fragments, and then those into whole genomes,” Professor Snyder said. Such long sequences of DNA can span hundreds or even thousands of genes that couldn’t be recovered from short-read sequencing. They can help classify bacteria and other organisms by how related they are to one another, and the long sequences also help identify rare bacteria that might be missed by current methods. Professor Snyder said they can be used to assemble “either entire genomes or at least very, very large chunks of the genome”. “We assembled one whole genome from this big gemisch, which has never been done before,” said Professor Snyder. The team used new computational approaches

Stanford University scientists have produced a new technique for mapping the bacteria living in the human gut, revealing a far more diverse community than the researchers had anticipated. Their work has been published in the journal Nature Biotechnology.

n the past, researchers could only study

bacteria that would grow in the lab, despite the

and long-read DNA sequencing to reveal the diversity of bacteria in the gut microbiome of a single male human — not only lots of species, but many different strains of the same species. One bacterial species included five separate strains, all from one person.

technologies have created only a blurry picture

“I don’t think people realised just how much

and prevented researchers from seeing all that

diversity there was,” Professor Snyder said. “The

is there. The Stanford team has overcome some

complexity we found was astounding.”

of these limitations to create a sharper picture of

The new approach will make it easier to

the bacterial community, or microbiome, of the

construct the evolutionary history of strains of

infectious bacteria or viruses, such as Ebola. It

fact that the vast majority of bacterial species will

Professor Michael Snyder, a co-author on the

could also be used in the field to study microbial

not grow on traditional culture media. As a result,

diversity in healthy people and other animals, as

the true diversity of bacteria throughout the living

well as in plants, water and soil.

sequences. If you are looking at just one genome,

“When we put this together now, using these

Gene sequencing has recently begun to

you can assemble the snippets into a whole genome,

like pieces of a jigsaw puzzle. But when you are

Snyder said. “You can see the whole thing much

looking at snippets from a mass of different bacteria

more clearly than with what we do now, which is

have looked, but the limitations of current

from the human gut, assembling those snippets is