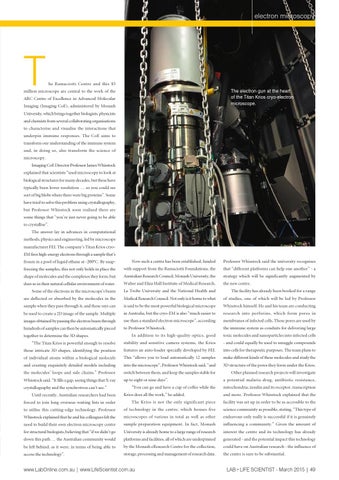 he Ramaciotti Centre and this $5 The electron gun at the heart of the Titan Krios cryo-electron microscope.

million microscope are central to the work of the ARC Centre of Excellence in Advanced Molecular Imaging (Imaging CoE), administered by Monash University, which brings together biologists, physicists and chemists from several collaborating organisations to characterise and visualise the interactions that underpin immune responses. The CoE aims to transform our understanding of the immune system and, in doing so, also transform the science of microscopy. Imaging CoE Director Professor James Whisstock explained that scientists “used microscopy to look at biological structures for many decades, but these have typically been lower resolution … so you could see sort of big blobs where there were big proteins”. Some have tried to solve this problem using crystallography, but Professor Whisstock soon realised there are some things that “you’re just never going to be able to crystallise”. The answer lay in advances in computational methods, physics and engineering, led by microscope manufacturer FEI. The company’s Titan Krios cryoEM fires high-energy electrons through a sample that’s frozen in a pool of liquid ethane at -200°C. By snap-

Now such a centre has been established, funded

freezing the samples, this not only holds in place the

with support from the Ramaciotti Foundations, the

that “different platforms can help one another” - a

shape of molecules and the complexes they form, but

strategy which will be significantly augmented by

does so in their natural cellular environment of water.

Some of the electrons in the microscope’s beam

La Trobe University and the National Health and

The facility has already been booked for a range

are deflected or absorbed by the molecules in the

Medical Research Council. Not only is it home to what

of studies, one of which will be led by Professor

sample when they pass through it, and these rays can

is said to be the most powerful biological microscope

Whisstock himself. He and his team are conducting

be used to create a 2D image of the sample. Multiple

in Australia, but the cryo-EM is also “much easier to

research into perforins, which form pores in

images obtained by passing the electron beam through

use than a standard electron microscope”, according

membranes of infected cells. These pores are used by

hundreds of samples can then be automatically pieced

the immune system as conduits for delivering large

together to determine the 3D shapes.

In addition to its high-quality optics, good

“The Titan Krios is powerful enough to resolve

- and could equally be used to smuggle compounds

into cells for therapeutic purposes. The team plans to

of individual atoms within a biological molecule

This “allows you to load automatically 12 samples

make different kinds of these molecules and study the

and creating exquisitely detailed models including

into the microscope”, Professor Whisstock said, “and

3D structure of the pores they form under the Krios.

the molecules’ loops and side chains,” Professor

switch between them, and keep the samples stable for

Whisstock said. “It fills a gap, seeing things that X-ray

up to eight or nine days”.

crystallography and the synchrotron can’t see.” Until recently, Australian researchers had been

“You can go and have a cup of coffee while the Krios does all the work,” he added.

Other planned research projects will investigate a potential malaria drug, antibiotic resistance, mitochondria, insulin and its receptor, transcription and more. Professor Whisstock explained that the

The Krios is not the only significant piece

to utilise this cutting-edge technology. Professor

of technology in the centre, which houses five

science community as possible, stating, “This type of

Whisstock explained that he and his colleagues felt the

microscopes of various in total as well as other

endeavour only really is successful if it is genuinely

need to build their own electron microscopy centre

influencing a community.” Given the amount of

for structural biologists, believing that “if we didn’t go

University is already home to a large range of research

interest the centre and its technology has already

down this path … the Australian community would

platforms and facilities, all of which are underpinned

generated - and the potential impact this technology

be left behind, as it were, in terms of being able to

by the Monash eResearch Centre for the collection,

could have on Australian research - the influence of

the centre is sure to be substantial.