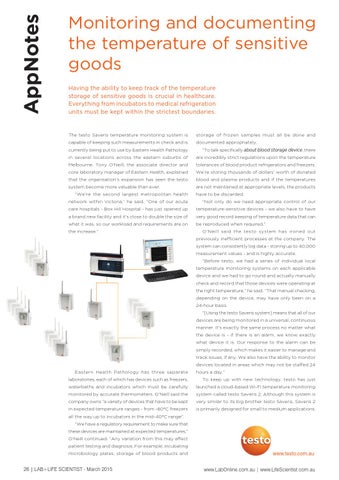 storage of frozen samples must all be done and

capable of keeping such measurements in check and is

currently being put to use by Eastern Health Pathology

“To talk specifically about blood storage device, there

in several locations across the eastern suburbs of

are incredibly strict regulations upon the temperature

We’re storing thousands of dollars’ worth of donated

that the organisation’s expansion has seen the testo

blood and plasma products and if the temperatures

system become more valuable than ever.

are not maintained at appropriate levels, the products

have to be discarded.

network within Victoria,” he said. “One of our acute

“Not only do we need appropriate control of our

temperature-sensitive devices - we also have to have

very good record keeping of temperature data that can

what it was, so our workload and requirements are on

be reproduced when required.”

O’Neill said the testo system has ironed out previously inefficient processes at the company. The system can consistently log data - storing up to 40,000 measurement values - and is highly accurate. “Before testo, we had a series of individual local temperature monitoring systems on each applicable device and we had to go round and actually manually check and record that those devices were operating at the right temperature,” he said. “That manual checking, depending on the device, may have only been on a 24-hour basis. “[Using the testo Saveris system] means that all of our devices are being monitored in a universal, continuous manner. It’s exactly the same process no matter what the device is - if there is an alarm, we know exactly what device it is. Our response to the alarm can be simply recorded, which makes it easier to manage and track issues, if any. We also have the ability to monitor devices located in areas which may not be staffed 24

laboratories, each of which has devices such as freezers,

To keep up with new technology, testo has just

waterbaths and incubators which must be carefully

system called testo Saveris 2. Although this system is

company owns “a variety of devices that have to be kept

is primarily designed for small to medium applications.

all the way up to incubators in the mid-40°C range”. “We have a regulatory requirement to make sure that these devices are maintained at expected temperatures,” O’Neill continued. “Any variation from this may affect patient testing and diagnosis. For example, incubating microbiology plates, storage of blood products and