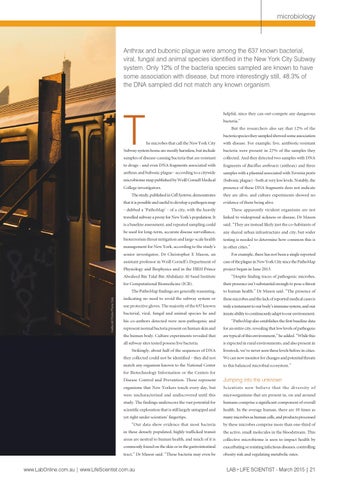 Anthrax and bubonic plague were among the 637 known bacterial, viral, fungal and animal species identified in the New York City Subway system. Only 12% of the bacteria species sampled are known to have some association with disease, but more interestingly still, 48.3% of the DNA sampled did not match any known organism.

helpful, since they can out-compete any dangerous bacteria.” But the researchers also say that 12% of the bacteria species they sampled showed some association he microbes that call the New York City

with disease. For example, live, antibiotic-resistant

Subway system home are mostly harmless, but include

bacteria were present in 27% of the samples they

samples of disease-causing bacteria that are resistant

collected. And they detected two samples with DNA

to drugs - and even DNA fragments associated with

anthrax and bubonic plague - according to a citywide

samples with a plasmid associated with Yersinia pestis

(bubonic plague) - both at very low levels. Notably, the

presence of these DNA fragments does not indicate

The study, published in Cell Systems, demonstrates that it is possible and useful to develop a pathogen map

evidence of them being alive.

- dubbed a ‘PathoMap’ - of a city, with the heavily

These apparently virulent organisms are not

travelled subway a proxy for New York’s population. It

is a baseline assessment, and repeated sampling could

said. “They are instead likely just the co-habitants of

any shared urban infrastructure and city, but wider

testing is needed to determine how common this is

management for New York, according to the study’s

For example, there has not been a single reported

case of the plague in New York City since the PathoMap

Physiology and Biophysics and in the HRH Prince

they are alive, and culture experiments showed no

“Despite finding traces of pathogenic microbes, their presence isn’t substantial enough to pose a threat

The PathoMap findings are generally reassuring,

to human health,” Dr Mason said. “The presence of

indicating no need to avoid the subway system or

these microbes and the lack of reported medical cases is

use protective gloves. The majority of the 637 known

truly a testament to our body’s immune system, and our

bacterial, viral, fungal and animal species he and

innate ability to continuously adapt to our environment.

his co-authors detected were non-pathogenic and

for an entire city, revealing that low levels of pathogens

are typical of this environment,” he added. “While this

is expected in rural environments, and also present in

Strikingly, about half of the sequences of DNA

livestock, we’ve never seen these levels before in cities.

they collected could not be identified - they did not

We can now monitor for changes and potential threats

match any organism known to the National Center

to this balanced microbial ecosystem.”

for Biotechnology Information or the Centers for Disease Control and Prevention. These represent

Jumping into the unknown

organisms that New Yorkers touch every day, but

Scientists now believe that the diversity of

were uncharacterised and undiscovered until this

microorganisms that are present in, on and around

study. The findings underscore the vast potential for

scientific exploration that is still largely untapped and

health. In the average human, there are 10 times as

yet right under scientists’ fingertips.

many microbes as human cells, and products processed

“Our data show evidence that most bacteria

by these microbes comprise more than one-third of

the active, small molecules in the bloodstream. This

areas are neutral to human health, and much of it is

collective microbiome is seen to impact health by

commonly found on the skin or in the gastrointestinal

tract,” Dr Mason said. “These bacteria may even be