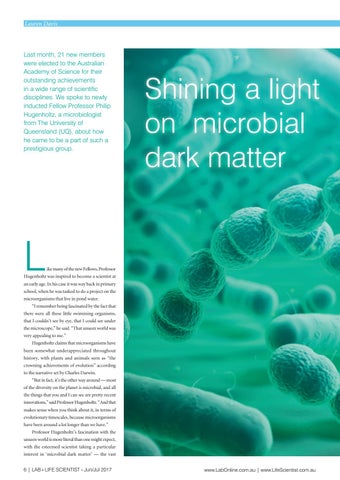 Last month, 21 new members were elected to the Australian Academy of Science for their outstanding achievements in a wide range of scientific disciplines. We spoke to newly inducted Fellow Professor Philip Hugenholtz, a microbiologist from The University of Queensland (UQ), about how he came to be a part of such a prestigious group.

ike many of the new Fellows, Professor

Hugenholtz was inspired to become a scientist at an early age. In his case it was way back in primary school, when he was tasked to do a project on the microorganisms that live in pond water. “I remember being fascinated by the fact that there were all these little swimming organisms, that I couldn’t see by eye, that I could see under the microscope,” he said. “That unseen world was very appealing to me.” Hugenholtz claims that microorganisms have been somewhat underappreciated throughout history, with plants and animals seen as “the crowning achievements of evolution” according to the narrative set by Charles Darwin. “But in fact, it’s the other way around — most of the diversity on the planet is microbial, and all the things that you and I can see are pretty recent innovations,” said Professor Hugenholtz. “And that makes sense when you think about it, in terms of evolutionary timescales, because microorganisms have been around a lot longer than we have.” Professor Hugenholtz’s fascination with the unseen world is more literal than one might expect, with the esteemed scientist taking a particular interest in ‘microbial dark matter’ — the vast