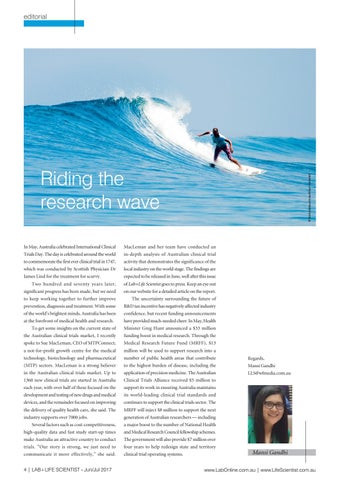 Riding the research wave In May, Australia celebrated International Clinical

MacLeman and her team have conducted an

Trials Day. The day is celebrated around the world

to commemorate the first ever clinical trial in 1747,

activity that demonstrates the significance of the

which was conducted by Scottish Physician Dr

local industry on the world stage. The findings are

James Lind for the treatment for scurvy.

expected to be released in June, well after this issue

of Lab+Life Scientist goes to press. Keep an eye out

significant progress has been made, but we need

on our website for a detailed article on the report.

to keep working together to further improve

The uncertainty surrounding the future of

prevention, diagnosis and treatment. With some

of the world’s brightest minds, Australia has been

at the forefront of medical health and research.

have provided much-needed cheer. In May, Health

To get some insights on the current state of

funding boost in medical research. Through the

a not-for-profit growth centre for the medical

million will be used to support research into a

to the highest burden of disease, including the

in the Australian clinical trials market. Up to

application of precision medicine. The Australian

each year, with over half of these focused on the

development and testing of new drugs and medical

its world-leading clinical trial standards and

devices, and the remainder focused on improving

continues to support the clinical trials sector. The

the delivery of quality health care, she said. The

MRFF will inject $8 million to support the next

generation of Australian researchers — including

Several factors such as cost-competitiveness,

a major boost to the number of National Health

The government will also provide $7 million over

trials. “Our story is strong, we just need to

communicate it more effectively,” she said.